30. Marine Mammals (Cetacea and Sirenia) from the Eocene of Gebel Mokattam and Fayum, Egypt: Stratigraphy, Age, and Paleoenvironments 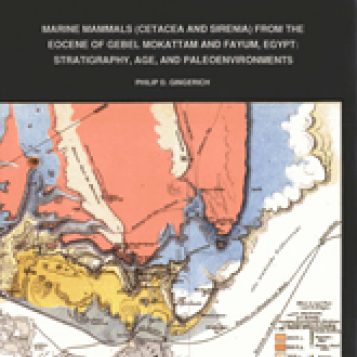 Gebel Mokattam and Fayum are well known among vertebrate paleontologists for their rich and diverse faunas of Eocene marine mammals. Ten cetacean and seven sirenian species have been named from these two areas. The Eocene stratigraphy of each is reviewed here, and Fayum stratigraphy is supplemented with new observations. The Mokattam Formztion and most of the Giushi Formation at Gebel Mokattam are Lutetian and Bartonian (middle Eocene) in age, and these record deposition offshore in marine shelf and shallow shelf environments. The Maadi Formation at Gebel Mokattam is Priabonian (late Eocene) in age, and was deposited in nearshore and lagoonal environments. (Go to the link and see more of this paper.)