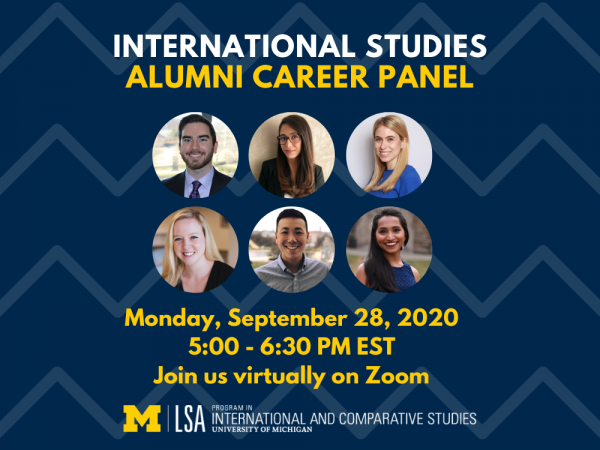 The Program in International and Comparative Studies (PICS) will host its fourth annual International Studies Virtual Alumni Career Panel on September 28, 2020. Please note: This session will be held virtually EST through Zoom. This webinar is free and open to students, but registration is required. Once you've registered the joining information will be sent to your email.

This virtual alumni panel will showcase and celebrate the university’s rich history of contributions made by International Studies alumni, while providing valuable insight for current students as they start to develop their own career paths. The panel will include a student Q&A portion.

Learn where an International Studies major can take you!

Devin Bathish, Executive Director, Arab American Heritage Council (AAHC)
Flint, MI
BA International Studies – International Security, Cooperation, and Norms; BA Political Science; minor, Arab and Muslim American Studies ‘17
Devin Bathish is the Executive Director of the Arab American Heritage Council (AAHC), an Arab community nonprofit based in Flint, MI. Devin directs the AAHC’s four primary functions: preserving & celebrating Arab culture and heritage, promoting understanding of Arab identity, uniting the Greater Flint Arab community, and providing immigration and translation assistance. Since starting his role in 2017, Devin has served as an ambassador for the Flint Arab community by educating others about Arabs and the Middle East. Additionally, Devin advocates for policies that collectively benefit the Arab American community and empowers younger generations of Flint Arab Americans. While a student at the University of Michigan, Devin served on Central Student Government and worked to create better representation for Middle Eastern & North African students, was a board member of Students Allied for Freedom and Equality (SAFE), a choreographer for the Arabesque Dance Troupe, and a member of the Islamophobia Working Group.

Matin Fallahi, Juris Doctor, Michigan State University College of Law 2020
East Lansing, MI
BA International Studies – Comparative Culture and Identity; BA Near East Studies ‘16
Matin Fallahi graduated from the University of Michigan in 2016. During her time at Michigan, she worked as a front clerk at the Program in International and Comparative Studies (PICS), was the student commencement speaker for the PICS graduation in 2016, studied abroad in Istanbul, Turkey, was vice president of both the Persian Students Association and Delta Gamma Phi-- a pre-law sorority. Matin is completing her final semester of law school at Michigan State University College of Law. During her law school career, she has had the opportunity to intern at various law firms, argue motions in front of honorable Michigan judges, and work in the in house-legal department of a Fortune 400 company. Matin just recently graduated law school and sat for the 2020 July bar exam. She will be working at a large firm in the Metro Detroit area as a law clerk after graduation, and intends to transition to an Associate position at the firm pending bar results.

Melissa Gibson, Associate, Global Markets Team, Clinton Health Access Initiative, Inc.
Washington, D.C.
BA International Studies – Global Environment and Health; minor, Afroamerican and African Studies; minor, Science, Technology, and Society ‘15
Melissa Gibson is an Associate on the Clinton Health Access Initiative’s (CHAI) Global Markets Deal Execution Team. Her team focuses their efforts on marketing-shaping interventions, like volume guarantees, across low/middle income countries in Sub-Saharan Africa and Southeast Asia. Prior to CHAI, she worked in business development for Boston Consulting Group’s (BCG) healthcare and private equity practice areas. (In between leaving BCG and joining CHAI, she spent five months traveling in Asia, which she highly recommends.) Melissa graduated from The University of Michigan with a bachelor’s degree in International Studies - global health focus - and dual minors in African Studies and Science, Technology, and Society. After graduation, she received a year-long Princeton in Africa Fellowship and joined the UN World Food Programme’s Regional Bureau in Johannesburg, South Africa. Upon completion of her fellowship, Melissa was hired as a consultant to assist with a regional emergency response to drought-induced drop failure. While at Michigan, Melissa interned with the Clinton Foundation, the International Rescue Committee, and USAID’s Office of HIV/AIDS. After her sophomore year, she spent a month in South Africa doing research with two professors and later wrote her thesis on the country’s HIV/AIDS epidemic. She also spent half her junior year abroad in Spain.

Alex Huang, Director of Programs and Community Engagement, Asian Pacific American Institute for Congressional Studies
Washington, D.C.
BA International Studies – International Security, Cooperation, and Norms; BA Spanish; minor, Music ‘12
Alex is the Director of Programs and Community Engagement at the Asian Pacific American Institute for Congressional Studies (APAICS). In this capacity, he leads the development and implementation of programming to advance the leadership and representation of Asian Americans and Pacific Islanders (AAPIs) in the political process. Prior to APAICS, Alex worked for two Members of Congress representing Michigan and California where he focused on issues including federal appropriations, education, labor, energy, interior, environment, and housing policy. Alex started his career as a second grade teacher in Detroit as a Teach for America Corps Member. He sits as a Board Member of the Grassroots Education Project, APAICS Alumni Association, and previously as Vice President of the Congressional Asian Pacific American Staff Association. In addition to his current role, Alex runs a volunteer tutoring program at a Washington, D.C. elementary school. He holds a Bachelors and Masters degree from the University of Michigan and is a native of Kalamazoo, Michigan.

Shalini Rao, Consultant, Booz Allen Hamilton
Washington, D.C.
BA International Studies – Political Economy and Development; BA Economics; minor, Business Administration ‘18
Shalini Rao is a Consultant at Booz Allen Hamilton working in foreign policy analysis and government program strategy. Her client is a government agency that partners with countries to manage infectious disease outbreaks and mitigate biological weapons risks. Her daily tasks include assessing geopolitical trends, analyzing how the client's country engagements align with foreign policy objectives, and project management support. Through this work, Shalini is gaining exposure to what various government agencies, including the Department of Defense, Department of State, United States Agency for International Development, and the United Nations do in global health, and how to implement projects based on policy goals. Prior to working as a consultant, Shalini interned at the Federal Reserve Board's Community Development Division and spent a summer working in economic development with an NGO in Peru. Shalini continues her interest in economic development with volunteer work with District Bridges, a non-profit in DC.

Meghan Rowley, Latin America Program Associate, The International Republican Institute
Washington, D.C.
BA Public Policy; minor, International Studies; minor, Spanish ‘18
Meghan Rowley is a Latin America Program Associate for the Ecuador and Panama portfolios at the International Republican Institute (IRI). In her role, she assists in the implementation of several government grants in both countries aimed at strengthening transparency and accountability, legislative capacity, investigative and electoral journalism, civic participation, and democratic governance. She was previously a Project Assistant at Wiley Rein LLP, assisting in anti-dumping and countervailing cases in the firm’s International Trade practice. A recent graduate of the University of Michigan, she holds a degree in Public Policy with minors in International Studies and Spanish. During her undergraduate years she interned with the Atlantic Council, edited for the Michigan Journal of International Affairs, and studied abroad in Chile and Belgium. She currently serves as a member of the Young Professionals in Foreign Policy.

If there is anything we can do to make this event accessible to you, please contact us at is-michigan@umich.edu. Please be aware that advance notice is necessary as some accommodations may require more time for the university to arrange.
LSA Opportunity Hub
LSA Building
500 S. State Street
Ann Arbor, MI 48109
lsa-opphub@umich.edu
The LSA Opportunity Hub Information Desk is open Monday to Friday, from 10:00 a.m.-3:00 p.m.
734-763-4674
Sitemap
Instagram