What's Going On at MEMS?

MEMS continues to sponsor the Premodern Colloquium (meets Sundays once a month) and support the Medieval Lunch series (see schedule under Rackham Seminars on this site) as well as occasional MEMS Lectures.

We hope you will join us, and watch the website calendar of events for upcoming lectures and other activities of interest!

What a 12th Century Muslim says to a 21st Century Christian in Andalusia: Inheriting a Complex Religious Identity 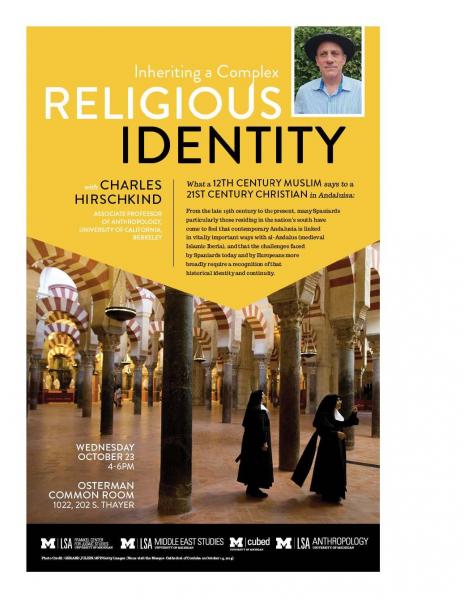 From the late 19th century to the present, many Spaniards—particularly those residing in the nation’s south—have come to feel that contemporary Andalusia is linked in vitally important ways with al-Andalus (medieval Islamic Iberia), and that the challenges faced by Spaniards today—and by Europeans more broadly—require a recognition of that historical identity and continuity. Discovering themselves to be inheritors of an historical identity deeply marked by the Islamic tradition (an identity insistently denied and erased within Spanish nationalist discourse), these men and women have found Islam to be integral to their lives in ways that upset their coordinates of identity, as Europeans, Spaniards, or Andalusians. In this talk, and keeping in mind the theme of this workshop, I want to think about historical memory as a medium of religious communication, or more precisely, of a religious interpellation addressed to a subject outside the bounds of that religion. While it is common to think about the legacies of al-Andalus as “cultural” rather than religious, neither of these modern terms, I argue, can do justice to the disruptive impact of the Iberian past on those who listen to its call. Drawing on the archive of Andalucismo, this talk asks: what does it mean for a modern European Christian to be the inheritor of a Muslim past?
Medieval and Early Modern Studies
Room 1029 Tisch Hall
435 S. State St.
Ann Arbor, MI 48109-1003
telf@umich.edu
734.763.2066
734.647.4881
Sitemap
Facebook Twitter Youtube