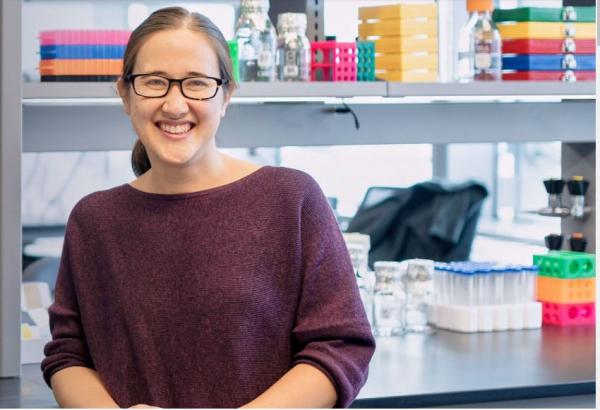 Abstract: Olfactory navigation provides a tractable model for studying the circuit basis of sensori-motor transformations and goal-directed behavior. Macroscopic organisms typically navigate in odor plumes that provide a noisy and uncertain signal about the location of an odor source. Work in many species has suggested that animals accomplish this task by combining temporal processing of dynamic odor information with an estimate of wind direction.

Our lab has been using adult walking Drosophila to understand both the computational algorithms and the neural circuits that support navigation in a plume of attractive food odor. We developed a high-throughput paradigm to study behavioral responses to temporally-controlled odor and wind stimuli. Using this paradigm we found that flies respond to a food odor (apple cider vinegar) with two behaviors: during the odor they run upwind, while after odor loss they perform a local search. A simple computational model based one these two responses is sufficient to replicate many aspects of fly behavior in a natural turbulent plume.

In on-going work, we are seeking to identify the neural circuits and biophysical mechanisms that perform the computations delineated by our model. Using electrophysiology, we have identified mechanosensory neurons that compute wind direction from movements of the two antennae, and central mechanosensory neurons that encode wind direction are involved in generating a stable downwind orientation. Using optogenetic activation, we have traced olfactory circuits capable of evoking upwind orientation and offset search from the periphery, through the mushroom body and lateral horn, to the central complex. Most recently, connectomic analysis has suggested a plausible model for how wind and odor information might be integrated in the central complex to allow flies to flexibly alter their orientation to wind. Our work illustrates how the tools available in fruit fly can be applied to dissect the mechanisms underlying a complex goal-directed behavior.
Molecular, Cellular, and Developmental Biology (MCDB)
2220 Biological Science Building
1105 North University Ave.
Ann Arbor, MI 48109-1085
mcdb-web@umich.edu
Prospective undergrads: Contact the Program in Biology 734-763-7984, lsa-biology-advising@umich.edu -- Graduate students: Grad Coordinator 734-615-1635 -- Chair's office: 734-764-7427
734-763-7142
Sitemap
Facebook Twitter