Find Yourself in LSA
Meet the students who are just like you. They’re discovering how to make the most of their LSA experiences—and discovering more about themselves in the process.
Engaged Learning
In the College of LSA, because your education is about more than searching for answers in a textbook, we offer numerous programs that foster hands-on work, innovative thinking, and experiences that challenge and transform.
College Connections
College Connections provides a space for alumni and families to share their student experiences with recent LSA graduates and provide feedback on the current and future state of the College.
Staff Achievement Awards Program
This is an annual opportunity to acknowledge and celebrate exceptional staff contributions to the success of the College . Information regarding eligibility, nomination, selection, notification, and winners can be found here.

Wallace House Presents “The 1619 Project: Examining the Legacy of Slavery and the Building of a Nation” 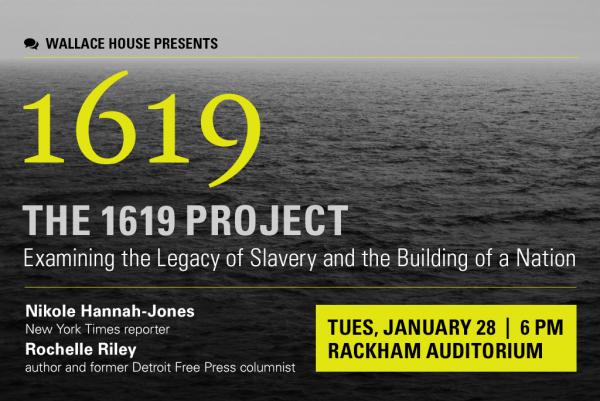 Journalism is often called the first draft of history. But journalism can also be used as a powerful tool for examining history.

Four hundred years ago, in August 1619, a ship carrying enslaved Africans arrived in the English colony of Virginia, establishing the system of slavery on which the United States was built.

With The 1619 Project, The New York Times is prompting conversation and debate about the legacy of slavery and its influence over American society and culture. From mass incarceration to traffic jams, the project seeks to reframe our understanding of American history and the fight to live up to our nation’s central promise.

About the Speaker:
Nikole Hannah-Jones is a domestic correspondent for The New York Times Magazine focusing on racial injustice. She has written on federal failures to enforce the Fair Housing Act, the resegregation of American schools and policing in America. Her extensive reporting in both print and radio on the ways segregation in housing and schools is maintained through official action and policy has earned the National Magazine Award, a Peabody and a Polk Award. Her work designing “The 1619 Project” has been met with universal acclaim. The project was released in August 2019 to mark the 400th anniversary of American slavery and re-examines the role it plays in the history of the United States.

About the Moderator:
Rochelle Riley was a 2007-2008 Knight-Wallace Fellow and is the Director of Arts and Culture for the City of Detroit. For nineteen years she was a columnist at the Detroit Free Press. Riley is author of “The Burden: African Americans and the Enduring Impact of Slavery” and the upcoming “That They Lived: Twenty African Americans Who Changed The World.” She has won numerous national, state and local honors, including the 2017 Ida B. Wells Award from the National Association of Black Journalists for her outstanding efforts to make newsrooms and news coverage more accurately reflect the diversity of the communities they serve and the 2018 Detroit SPJ Lifetime Achievement Award alongside her longtime friend, Walter Middlebrook. She was a 2016 inductee into the Michigan Journalism Hall of Fame.