Make a Fool of Yourself

For 13 years, students in Mark Tucker’s “Art in Public Spaces” course have made enormous papier-mâché puppets that require imagination and many DIY skills — but the real challenge is learning how to work together. 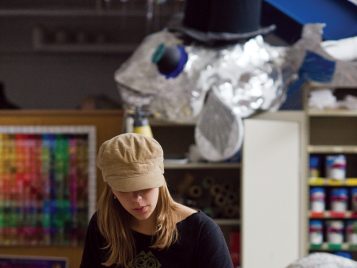 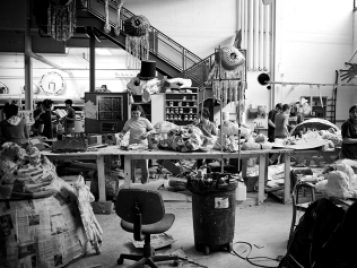 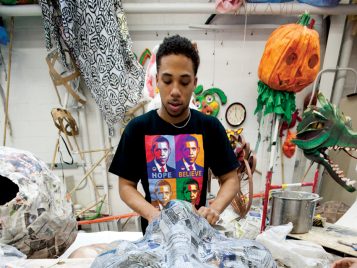 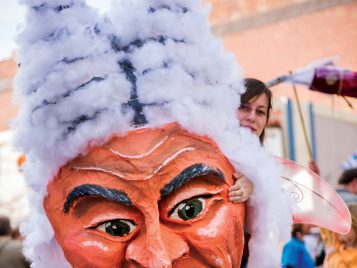 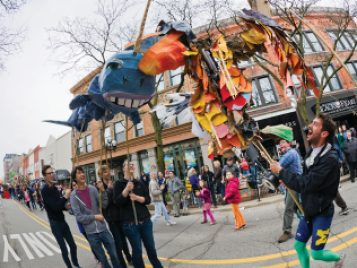 This is an article from the fall 2018 issue of LSA Magazine. Read more stories from the magazine.

Say someone asks you to make something — something that you can understand and envision, but that you’ve never actually seen. If it were the 1970s, you’d probably pull out some paper and start drawing. If it’s today, you’d probably go straight to YouTube.

There is a delicious satisfaction in making a tin can lantern or fish wind chime out of spoons after you’ve watched someone on the internet show you how. Creating something by following someone else’s steps avoids any issues and streamlines the process, so does it matter if you didn’t actually come up with the solutions yourself? Maybe, says Mark Tucker, art director for LSA’s Lloyd Hall Scholars Program.

“There’s something about imagination that I’m not going to say is being lost, but it’s definitely being changed by digital natives,” Tucker says. “Before we even imagine the possibilities, we Google the answer instead. What do we lose by cutting out this one little step?”

That little step is often critical to the big leap students make in Tucker’s “Art in Public Spaces” course. In the course, which is intended for non-art majors, students create giant papier-mâché puppets to parade through downtown Ann Arbor as part of an annual event known as FestiFools that takes place near April Fools’ Day.

“I don’t tell the students their pieces have to be a certain size,” Tucker says. “They come into the studio every January and start something, and each project becomes the fish that grows to be as big as the tank.”

The tank in this case is the cavernous, three-story FestiFools studio where enormous arms and asymmetrical faces lay scattered around the floor. A decapitated dragon, an elephant, the Monopoly man, and a giant pink mound that might be ice cream are just a few of the dozens of figures dangling from the rafters and trailing fabric torsos that are gathered into one corner, as if they were one giant curtain.

“It’s like a mausoleum in here because they’re not actually out on the street interacting,” Tucker says of the shapes he has finally come around to calling puppets. “It’s taken me 10 years to say, ok, I guess they are puppets. I always thought of them as kinetic, three-dimensional sculptures. I never saw them as what they really are, which are these painted paper figures on a stick that somehow come to life and connect to people on the street.

“There’s a real Ouija board aspect to being one of the three or four people underneath who think you’re going to carry it down the street, and then it starts to carry you down the street instead.”

That wizardry between puppets and people is something Tucker first encountered in Viareggio, Italy, during the month-long carnival it hosts every February. “They were making raw, irreverent, five-story-tall stuff, and half of Europe came by train to see this giant spectacle in a town the size of Ann Arbor,” he says. Tucker is elated by that kind of messy, participatory chaos. “When the spectator joins the spectacle, you know you’ve done something worthwhile.”

That effortless assemblage is essential in Tucker’s classroom, too.

“This class is not at all about do-it-yourself. It’s do-it-with-others,” he says, “and that is a tough sell. Asking for help is the last thing in the world students want to do. They hate group work. In here, though, the group work becomes more like, ‘Ummm, oohhh — that thing is falling over!’ And people run over and help. It’s a long arc to appreciate community collaboration every time.” And it’s also the point.

“None of these students are going to go into the world to become giant puppet makers, so why are we doing this? It’s a 15-week course and it’s only that one hour in the street where it — whatever it is — finally clicks.”

And here Tucker returns to imagination, which he believes is a teachable skill. “When companies say they want to hire people who are creative, I think that’s really what they’re talking about,” he says. “They’re talking about people who can imagine something that doesn’t exist. We’re helping people learn how to do that.”

No student in Tucker’s class makes a puppet from a prototype. Everything starts from scratch. But if you can do something like this and get a glimpse into creating art, Tucker says, it opens up something inside yourself that says maybe I am a creative person. And that’s empowering.

“They want instant success and want to have their idea instantly realized,” Tucker says. “It’s a hard struggle and it’s unwelcome for the most part. And yet, there is a deadline. And yet, there are 3,000 people on the street waiting to see what you bring. All of this leads to a very powerful day where, when they finally get to go out on the street with their best effort or their not-so-great effort, the public’s response tells them if what they did was good enough. The public can tell whether students have invested themselves in it, and the student feels them genuinely respond. It is honest exploration and presentation and honest feedback. That whole loop feels profound and very authentic.”