A virtual conversation with Amara Lakhous and Takoua Ben Mohamed 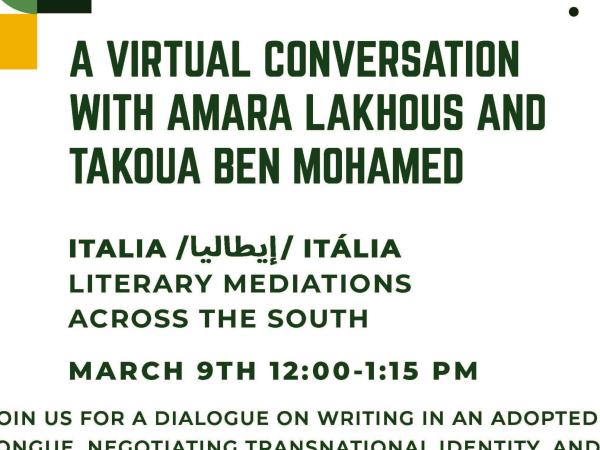 Join us for a dialogue on writing in an adopted tongue, negotiating transnational identity, and practices of cultural translations

Amara Lakhous was born in Algeria in 1970. He moved to Italy in 1995. He is the author of five novels, three of which were written in both Arabic and Italian. His best known works are the much acclaimed Clash of Civilizations Over an Elevator in Piazza Vittorio (2008), Divorce Islamic Style (2012), Dispute over an Very Italian Piglet (2014). The Prank of the Good Little Virgin in Via Ormea, came out in Italian in 2014 and published in English by Europa Editions in 2016. The latest novel in Arabic Tir al-lil, The Night Bird (2019) was longlisted in the International prize for Arabic Fiction 2021. Lakhous has been awarded, among others, the Flaiano Prize in Italy in 2006 and the Algerians Booksellers Prize in 2008.

Takoua Ben Mohamed is originally from Tunisia and in 1999 also moved to Rome with her mother and siblings to join her father. She is part of an emerging wave of Italian graphic journalists who draw upon their ethnic and racial backgrounds to describe contemporary Italian society. Her comics Sotto il Velo (2016) and Woman Story (2018) are multilingual, moving between Italian, Arabic and English and draw from numerous global pop references.

The main language of the event will be Italian with available interpretation to and from English.