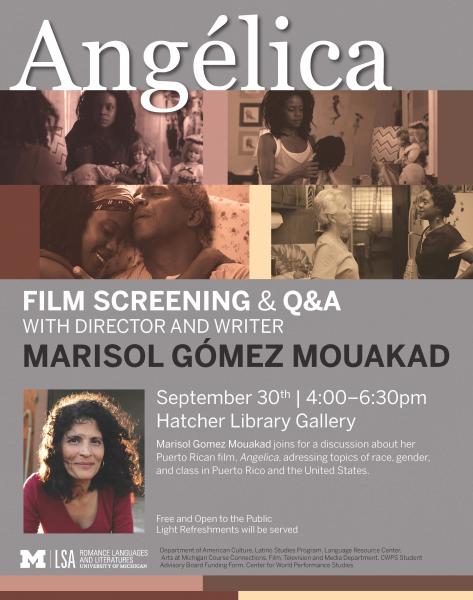 Please join us for a screening of the Puerto Rican film Angélica (2017). Following the screening, filmmaker Marisol Gómez-Mouakad will hold a Q&A.

Synopsis:
Angelica, after a long absence from Puerto Rico, returns when
her father, Wilfredo, suffers a stroke. This forced return and her father’s illness, forces Angelica to re-evaluate her relationship with her mother, and with her family members who don’t accept her because of her skin color. All this will force her to face herself and discover that she does not know who she is. Furthermore she does not like herself. After her father’s death, Angelica must decide whether to return to the comfort of her previous life, dissatisfied, but secure, or set on an adventurous path to rediscover herself as an independent, modern, strong, mulatto, and Puerto Rican woman in a globalized world that is in the cusp of the twenty-first century.