The Minimalist Syntax of Defective Domains: Gerunds and Infinitives. 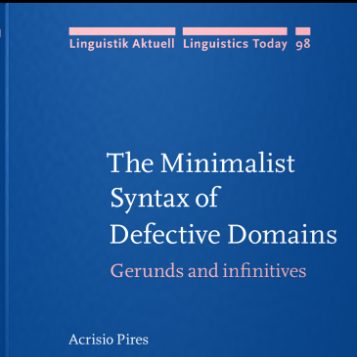 This book unifies the analysis of certain non-finite domains, focusing on subject licensing, agreement, and Case and control. It proposes a minimalist analysis of English gerunds which allows only a null subject PRO (TP-defective gerunds), a lexical subject (gerunds as complements of perception verbs), or both types of subjects (clausal gerunds). It then analyzes Portuguese infinitives, showing that the morphosyntactic properties of non-inflected and inflected infinitives correlate with distinct treatments of obligatory and non-obligatory control. It explores these and other phenomena to show that tense and event binding do not correlate with the contrast between control and raising/exceptional case marking (ECM), against null Case theories of control. A Probe-Goal approach to Case and agreement is adopted in combination with a movement analysis of control. The book then investigates diachronic morphosyntactic phenomena involving infinitives, verb movement and cliticization in Portuguese, exploring a cue-based theory of syntactic change grounded in language acquisition.