Andries Coetzee, associate professor and director of graduate studies for Linguistics, has been elected the new Editor of Language. Language is the flagship scholarly journal for the Linguistic Society of America (LSA). Andries will serve a seven-year term (2017-2023).

"As Editor-in-Chief of Language, I will have big figurative shoes to fill (including that of our very own Sally Thomason who was Editor-in-Chief from 1988 to 1994), says Andries. "With the support of the broader linguistics community, and of the U-M Linguistics Department in particular, I hope to maintain the nearly 100 year old tradition of Language being a venue where the best and most innovative research in our field is published."

With this new position, Andries gains not only responsibility but furniture as well, specifically a desk that belonged to William Dwight Whitney (1927-1894). Whitney was a professor of Sanskrit and instructor in modern languages at Yale University. It is believed that this desk was built to fit his specifications and that it is where he wrote “Sanskrit Grammar” (1879).

The desk was given by his daughter, Miss Emily Whitney, with the approval of her sisters, Miss Margaret and Miss Marion, to Nicholas Moseley, who in turn presented it to George S. Lane in September, 1962. It was refinished, repaired and restored to its current condition by the last-named person in December of the same year. The desk now belongs to LSA, and is passed on together with the editorship Language.

Previous editors who have had the desk include Bill Bright, Sally Thomason, Mark Aronoff, Brian Joseph, Greg Carlson. And now it will live in Andries's office for the next 7 years. U-M Linguistics is the only department in over 90 years to include two editors. 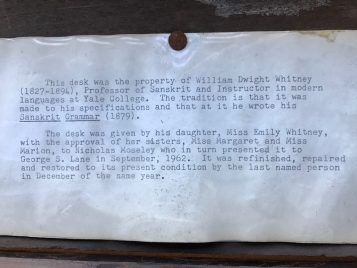 Andries Coetzee (University of Michigan) has been elected the new editor of Language, the LSA's flagship scholarly journal.  Coetzee has been a member of the LSA for more than a decade, and has served the Society in various capacities including as co-director of the 2013 Linguistic Institute (held in Ann Arbor) and associate director of the 2015 Linguistic Institute (held in Chicago). He is currently serving for the second year as co-chair of the Program Committee of the LSA. He received the Early Career Award from the LSA in 2011, and was inducted as a Fellow of the LSA in 2015. His research spans the areas of phonology and phonetics, with particular focuses on phonological variation, and the link between perception and production in individual language users. Most recently, his research has focused on the relation between the perception and production of coarticulated speech (supported through an NSF grant jointly awarded to himself and his Michigan colleague, Pam Beddor). His research also explores the complex linguistic landscape of South Africa, with particular focuses on Afrikaans (his native language) and Bantu languages from the Sotho-Tswana group. His research has appeared in journals such as Phonology, Natural Language and Linguistic Theory, Journal of Phonetics, Linguistic Review, Language, Laboratory Phonology, Journal of Semitics, and Theoretical Linguistics. He has also served on the editorial board of the journal Phonology since 2010.