Latin Inscriptions in the Kelsey Museum: The Dennison and De Criscio Collections 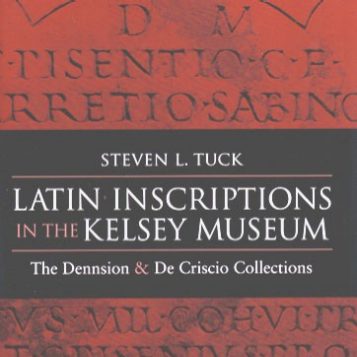 The Latin inscriptions in the Kelsey Museum are among the best primary sources we have for documenting the lives of the lower classes in the Roman world. They provide unique evidence of the details of Roman daily life, including beliefs, occupations, families, and attitudes toward death.The 400 entries in this volume include all of the Latin inscriptions on stone or metal in the Kelsey Museum of Archaeology at the University of Michigan; they represent the largest, and arguably the most important, collection of Latin inscriptions in the Western Hemisphere. The collection is notable not just for its size but for the fact that almost all the inscriptions were acquired by purchase for their scholarly and educational value to the members of the university community. Because of this, the collection is also an important testimony to a seminal phase in the development of the study of Classics at the University of Michigan. For the first time ever, this project makes the Latin inscriptions of the Kelsey available in one volume and has provided an opportunity to reexamine some texts that have not been edited in over a century. The commentaries for this edition have benefited from a wealth of recent scholarship resulting in some amended readings and reidentification of texts. 8.5 x 11. 264 pgs. 399 B&W photographs. (University of Michigan Press, 2006)