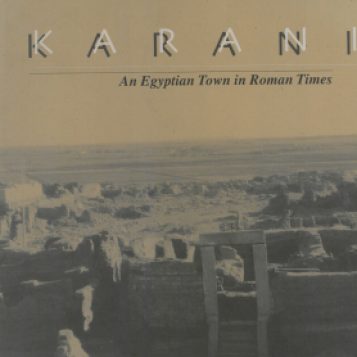 Edited by E.K. Gazda, with a new Preface and updated Bibliography by T.G. Wilfong

Subtitle: Discoveries of the University of Michigan Expedition to Egypt (1924-1935)

Karanis, a town in Egypt's Fayum region founded around 250 BC, housed a farming community with a diverse population and a complex material culture that lasted for hundreds of years. Ultimately abandoned and partly covered by the encroaching desert, Karanis eventually proved to be an extraordinarily rich archaeological site, yielding tens of thousands of artifacts and texts on papyrus that provide a wealth of information about daily life in the Roman-period Egyptian town. This volume tells of the history and culture of Karanis and also provides a useful introduction to the University of Michigan's excavations between 1924 and 1935 and to the artifacts, archival records, and photographs of the excavation that now form one of the major components of the collection of the Kelsey Museum of Archaeology. 50p, 75 figs.