AIA Lecture | Bones and Borscht: How Neolithic Human Remains from Ukraine Are Enabling the Reconstruction of European Population History and Our Understanding of Ancient Warfare 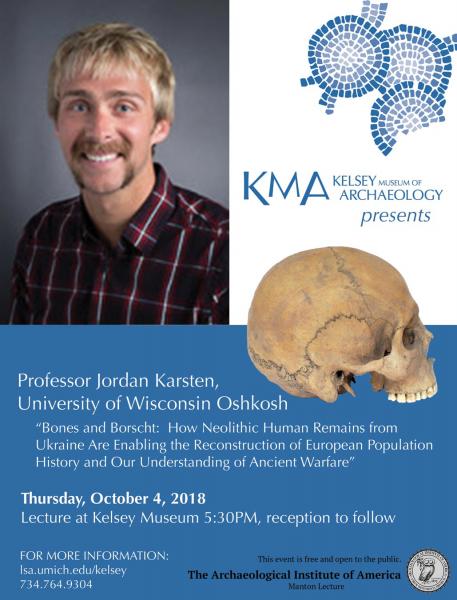 Recent developments in ancient DNA research have allowed archaeologists to reconstruct human migrations in ways that are reshaping our understanding of the past. One of the most remarkable aspects of this new research has been the recognition of two large-scale migrations in European prehistory. The first included the migration of Neolithic farmers into Europe from the Near East, while the second involved the movement of nomadic pastoralists out of the Pontic-Caspian steppe at the close of the Neolithic and beginning of the early Bronze Age. Many archaeologists and paleogeneticists have gone so far as to suggest this massive movement of people from the steppe was the mechanism that spread Indo-European languages and established modern European genetic signatures. However, these events remain imperfectly understood. For example, to what extent did expanding Neolithic farmers interbreed with existing Mesolithic hunter-gatherers? How did Neolithic farmers who neighbored the steppe populations interact with this important group? Is there any evidence for intergroup conflict associated with these massive population movements? These questions have been the focus of our research at Verteba Cave, Ukraine, one of the only known mortuary sites associated with the farmers of the Late Neolithic that bordered the steppe. The skeletal and genetic data we have collected from Verteba Cave are beginning to shed additional light on these extremely consequential time periods in European population history.

Sponsored by the Archaeological Institute of America. This event is free and open to the public.