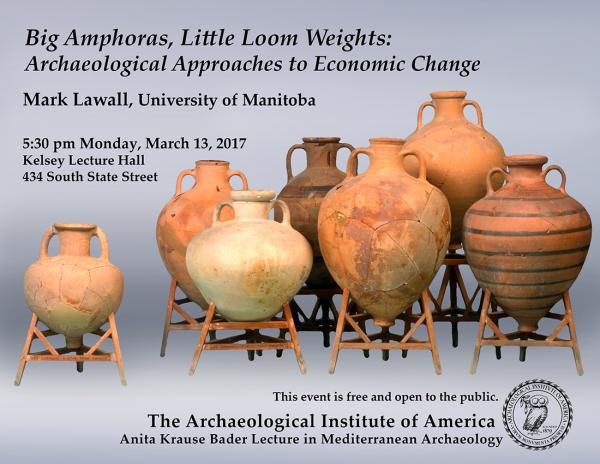 Scholars have long debated the degree of economic growth and development in the Graeco-Roman world. Much of the debate in recent years has focused on counting things (e.g., oil presses in north Africa) or measuring things (e.g., tonnages of shipwrecks). But economic change is not just about doing more; it is also about behaving differently.

Studying changes in behavior can still involve counting and measuring, but it also involves close study of the artifacts themselves. Agriculture was a major component of ancient economies, and the artifact most closely associated with agricultural production and trade was the plain clay transport amphora. From the Archaic through Hellenistic periods (roughly the 7th through 1st centuries BC), some of these jars became much more precisely standardized, some were carefully marked with their date of manufacture. Some types were closely identifiable with particular cities, others were only generically associated with broad regions. Such characteristics of these jars would have influenced how merchants and consumers behaved.

Ancient economies also depended on household production, of which the product most often mentioned is cloth. Greek vase painting and poetry is replete with images of women at the loom. This aspect of ancient economic life, however, has played little role in studies of ancient economic development. And yet, as with amphoras, we can see indications of changing behavior from a close study of loom weights, the small plain clay weights used to maintain tension on the threads of a Greek loom.