AIA Lecture: The Symposium in Context: Pottery from a Late Archaic Athenian House 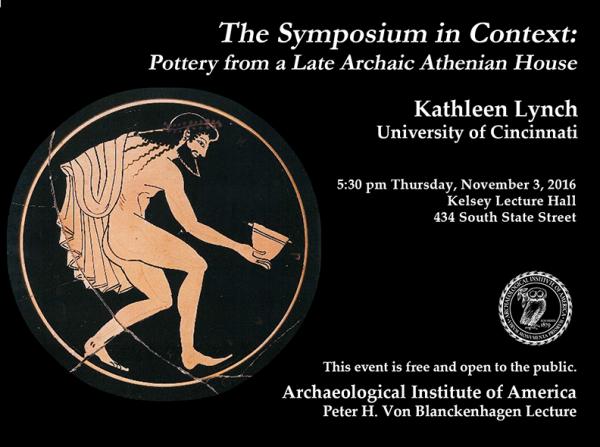 The symposium was a small, all-male drinking party held in a private home, and it was most popular from the Archaic to the Hellenistic period with some significant changes in form and meaning along the way.

The symposium focused on the shared consumption of wine. Men gathered in a small room, reclined on their left elbows, and participated equally in both the drinking and activities. All men were expected to speak on topics of philosophy and politics in turn or contribute to songs and stories. The wine loosened inhibitions and made it easier for the drinkers to form bonds.

Sympotic drinking required specialized ceramic equipment, designed only for use in the symposium. This paper will discuss the sympotic set from an Athenian house near the Classical Agora. It is the first well-preserved sympotic set from an individual house, so it provides the first evidence for the importance of the symposium in a real Athenian house. In fact, the sympotic pottery accounted for nearly 50% of this house’s crockery. The iconography on the sympotic pottery tells us something about the homeowner who chose the pots: he had a sense of humor, and he had an interest in cattle.