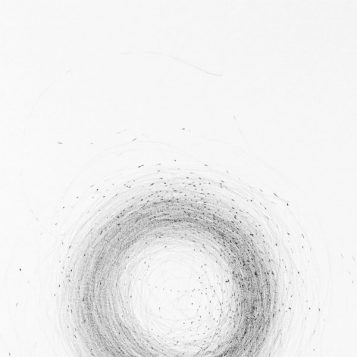 Artist and UM Art and Design student John Kannenberg opened his "Hours  of Infinity Part II: Twelve Hours of Infinity" exhibition on Friday March 9, 2012 in the Kelsey's Newberry Hall Corridor. Part I was mounted at the Work Gallery (306 S. State Street). Kannenberg's work for "Hours of Infinity" combined a rigorously  imprecise drawing method with a disciplined approach to sonic observation and documentation. His drawings were inspired by the Egyptian Amduat, examples of  which can be found in the Kelsey Museum collection. The Amduat is an ancient text depicting the journey the sun takes during the twelve  hours of nighttime before being reborn each morning at sunrise. These  cyclical drawings investigate the beautifully absurd imperfection inherent within the human experience of the Infinite. A third component of this project, a site-specific performance called "One Hour of  Infinity," took place on March 23, 2012. This one-hour performance, scattered throughout the Kelsey galleries, combined a rigorously imprecise drawing method, musical compositions based on specific objects in the museum's collection, and digitally manipulated sounds of the museum itself. This unconventional sonic performance explored the beautifully imperfect sense of timelessness experienced by traditional museum audiences.