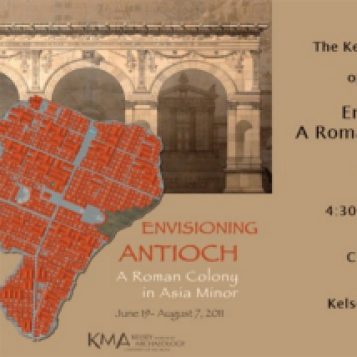 This exhitibion explored the Roman site of Antioch of Pisidia in Asia Minor (Turkey--a Greek city refounded by Rome’s first emperor, Augustus, in 25 BC as an imperial colony). The city is best known to the modern world as a destination on the missionary journeys of St. Paul in the first century AD, recounted in the book of Acts. In 1924, Francis W. Kelsey's expedition to Antioch uncovered several impressive structures along with many inscriptions and other artifacts. Thereafter, it was not until the 1980s that Turkish and other archaeological teams resumed work at the site. Survey and excavation continue to the present day.

“Envisioning Antioch” displayed archival documents and artifacts from Antioch in the Kelsey collections along with a physical model of the city. At the center of the exhibition was a 3-D movie that took viewers on a journey through a virtual-reality reconstruction of the city.

The exhibition celebrates the publication of a new book entitled Building a New Rome: The Imperial Colony of Pisidian Antioch, 25 BC-AD 700, which discusses the archaeology of the city and a nearby sanctuary of a local god. The book highlights recent research by archaeologists from the University of Michigan and other institutions.