Building a New Rome: The Imperial Colony of Pisidian Antioch 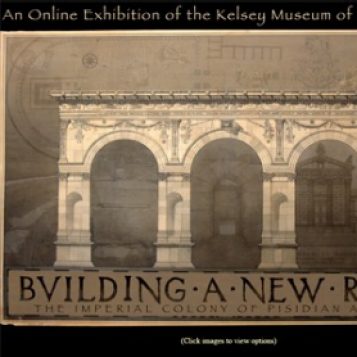 From January 13 to February 24, 2006, at the Duderstadt center on the University of Michigan north campus, the Kelsey Museum mounted an exhibition on the Roman site of Antioch of Pisidia in Asia Minor (Turkey)—a Hellenistic city refounded by Augustus in 25 BC as a Roman colony. In 1924 Francis W. Kelsey's expedition to Antioch had uncovered an elaborate city gate adjoining an imposing fortification wall. Colonnaded streets led past a large theater to an imperial sanctuary and beyond to a fountain house and bath complex, both fed by a massive aqueduct. The team also uncovered remains of two churches. This exhibition showed archival photographs and documents as well as artifacts from Antioch in the Kelsey collections. It also featured a physical model created with a 3-D printer and a video reconstruction that took viewers on a journey through the virtual city.