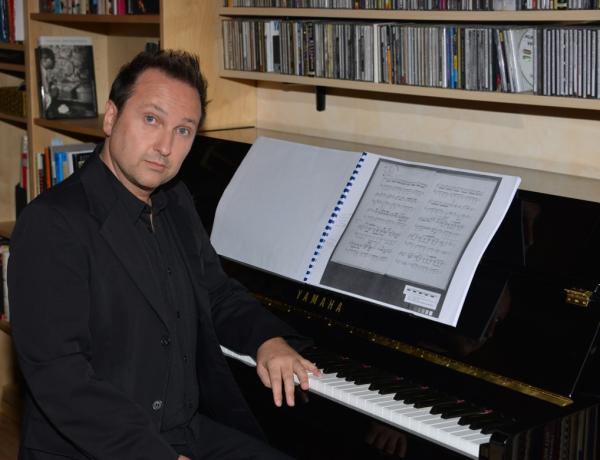 An ICAMus (The International Center for American Music) event, sponsored by MCECS (Michigan Center for Early Christian Studies), in collaboration with the Frankel Center for Judaic Studies and Dept. of Middle East Studies, University of Michigan

The Blues, an expression of late 19th-century Southern African-American folklore, is a river with many tributaries. Jazz, gospel, pop music with all its branches ranging from Broadway songs to hard rock via rock'n’roll and funk, are some of them. But there is another stream, running through the classical music of the twentieth century. Many composers turned their attention to the blues, and the number of Jewish classical composers who wrote blues is striking. Just to name a few: Castelnuovo-Tedesco, Milhaud, Copland, Gershwin; and Ullmann and Schulhoff who perished in the Shoah. Along this journey significant connections will be discovered between the African American and Jewish musical traditions.

The panel of specialists discussing the video includes:

Luca Bragalini is Professor of Jazz History at the Music Conservatory of Brescia, Italy. He has discovered unpublished works by Duke Ellington, Chet Baker and Luciano Chailly; some of them he has had premièred and recorded. A published author and lecturer, Professor Bragalini was Distinguished Scholar at Reed College (Portland, OR) where he offered a series of lectures on Ellington. His book Duke Ellington’s Symphonic Visions—published in Italy in 2018, with an accompanying CD of première recordings and previously unpublished archival photos, all contents discovered by Bragalini—is the first volume entirely dedicated to Ellington’s symphonic music.

ICAMus-The International Center for American Music http://www.icamus.org/ is a Non-Profit Organization, established in Florence in 2002. ICAMus is committed to the study, performance, and teaching of American music and America’s musical life, with special attention to pre-Civil War Early American Music. The Center is led by an international Board of Directors and an Advisory Board of specialists in the field, and is active through concerts, university courses, lectures, conferences, publications, recordings, and radio broadcasts. ICAMus has carried out numerous initiatives in Europe and the United States. It has assembled a special library, which also includes rare books and manuscripts.
Frankel Center for Judaic Studies
2111 South Thayer Building
202 S. Thayer St.
Ann Arbor, MI 48104-1608
JudaicStudies@umich.edu
734.763.9047
734.936.2186
Sitemap
Facebook Twitter Youtube