Book Launch & Conversation: "The Arab and Jewish Questions: Geographies of Engagement in Palestine and Beyond" 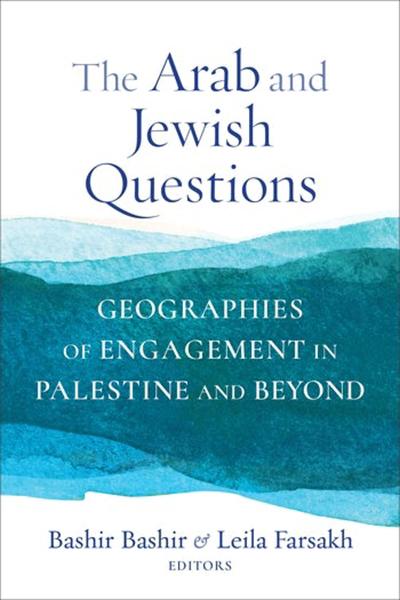 Nineteenth-century Europe turned the political status of its Jewish communities into the “Jewish Question,” as both Christianity and rising forms of nationalism viewed Jews as the ultimate other. With the onset of Zionism, this “question” migrated to Palestine and intensified under British colonial rule and in the aftermath of the Holocaust. Zionism’s attempt to solve the “Jewish Question” created what came to be known as the “Arab Question,” which concerned the presence and rights of the Arab population in Palestine. For the most part, however, Jewish settlers denied or dismissed the question they created, to the detriment of both Arabs and Jews in Palestine and elsewhere.

This book brings together leading scholars to consider how these two questions are entangled historically and in the present day. It offers critical analyses of Arab engagements with the question of Jewish rights alongside Zionist and non-Zionist Jewish considerations of Palestinian identity and political rights. Together, the essays show that the Arab and Jewish questions, and the Israeli-Palestinian conflict in which they have become subsumed, belong to the same thorny history. Despite their major differences, the historical Jewish and Arab questions are about the political rights of oppressed groups and their inclusion within exclusionary political communities—a question that continues to foment tensions in the Middle East, Europe, and the United States. Shedding new light on the intricate relationships among Orientalism, anti-Semitism, Islamophobia, colonialism, and the impasse in the Israeli-Palestinian conflict, this book reveals the inseparability of Arab and Jewish struggles for self-determination and political equality.

Bashir Bashir is an associate professor in the Department of Sociology, Political Science, and Communication at the Open University of Israel and a senior research fellow at the Van Leer Jerusalem Institute. He is the co-editor of The Holocaust and the Nakba: A New Grammar of Trauma and History (Columbia University Press, 2018).

Moshe Behar holds a PhD from Columbia University and is Associate Professor and Programme Director, Arabic & Middle Eastern Studies, University of Manchester. The title of his chapter is “Competing Marxisms, Cessation of (Settler) Colonialism, and the One-State Solution in Israel/Palestine,” in The Arab and Jewish Questions: Geographies of Engagementin Palestine and Beyond (Bashir Bashir & Leila Farsakh, eds, Columbia University Press).

NEWBOOK20 will give a 20% discount