At the moment, I’m reading Webb Keane’s Ethical Life: Its Natural and Social Histories, which was mostly written during Keane’s 2013-14 stint at the institute.
by Andreas Gailus 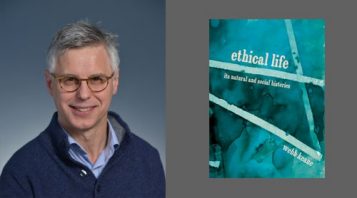 One of the pleasures of being a fellow at the Institute for the Humanities is that I finally have time to read the work of some of my colleagues here at the university. At the moment, I’m reading Webb Keane’s Ethical Life: Its Natural and Social Histories, which was mostly written during Keane’s 2013-14 stint at the institute. It’s a fantastic book: wide-ranging, ambitious, and very well written. Keane is an anthropologist, and one of the strengths of Ethical Life lies in its attention to the subtleties and complexities of everyday interaction. He also draws on a number of societies and disciplines (psychology, sociology, philosophy, political theory) to discuss topics as diverse as early childhood development, feminism, revolutionary movements, emergency phone calls, human rights, gossiping, etc.

Keane’s goal is not to develop a unified theory of ethics but to bring into conversation different perspectives on ethical life. The home of ethical life, he argues, is ordinary everyday interaction, the to-and-fro of conversational and bodily engagement in which people continually evaluate one another. Keane shows how such evaluation is driven by the constant work of projecting a sense of self and responding to the sense of self projected by others. He makes us see how much is at stake in seemingly ordinary encounters, and how vulnerable we are to others and to historical circumstance. And because the examples he gives are drawn from ethnographic research, his own and that of others, the picture of ethical life he paints is culturally varied and saturated with concrete historical detail.

Everyday ethical life extends, as it were, upwards and downwards. Downwards, because it draws on psychological capabilities that seem to appear in all children across all societies (this is the “natural” in Keane’s subtitle); and upwards, because frictions within ordinary ethical life, once named and made explicit, can provoke and fuel coordinated political action. What I really like about Keane’s book is how he marshals insights from different disciplines to complicate our picture of ethical life. Even though he is a very conceptual thinker, he doesn’t offer one a handy theory of ethics, let alone a series of normative claims. If anything, he reveals ethical complexity in areas that previously seemed much simpler, and flatter. To explain without explaining away—to me, that’s the mark of good scholarship.