GISC Beyond The Films Series. Halaloween Roundtable: Muslim Horror in the 21st Century 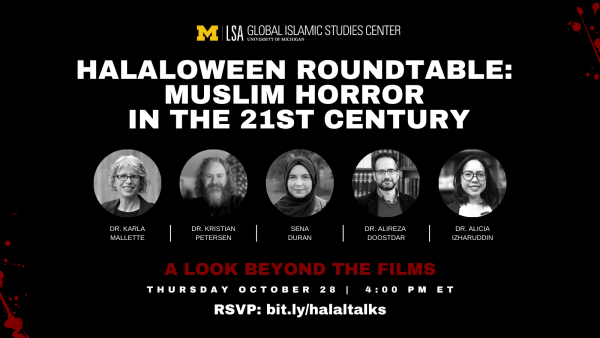 Join us on Thursday, October 28, from 4-6 PM ET as we wrap up Halaloween with a panel discussion on Muslim horror, the use (and misuse) of Islam and the Quran in the horror genre, feminist politics in horror, and how each region differs in its creation of horror films.

The panelists will offer some insight on Muslim horror, the Islamic theological and mythological figure of the jinn, women, gender, and sexuality in Muslim horror films, and a scholarly approach to understanding horror and genre films in the Muslim world.

Karla Mallette is professor of Mediterranean Studies in the Department of Middle East Studies and professor of Italian in the Department of Romance Languages and Literatures at the University of Michigan. She is the author of The Kingdom of Sicily, 1100-1250: A Literary History (2005), European Modernity and the Arab Mediterranean (2010), Lives of the Great Languages: Latin and Arabic in the Medieval Mediterranean (2021). She co-edited A Sea of Languages: Rethinking the Arabic Role in Medieval Literary History (2013) and has also written numerous articles on medieval literature and Mediterranean Studies. She is a former director of the Global Islamic Studies Center and currently chair of the Department of Middle East Studies at U-M.

Kristian Petersen has written about Muslim American celebrity activism, female filmmakers, the rise of the Muslim sitcom, Hollywood depictions of Iraqis, and “Muslim cinema.” He is the editor of Muslims in the Movies: A Global Anthology (ILEX Foundation & Harvard University Press, 2021) and New Approaches to Islam in Film (Routledge, 2021).

Sena Duran is a Ph.D. candidate in the Department of American Culture at the University of Michigan. Her work considers historical and contemporary depictions of Middle Eastern Muslims in film, with specific attention to body genre films and affective responses among audiences. Her dissertation project currently identifies the genre and industry of adult film as central to the study of racial, sexual, gendered, and national discourses in U.S. visual media productions of Middle Eastern Muslims.

Alireza Doostdar is an associate professor of Islamic Studies and the Anthropology of Religion at the University of Chicago Divinity School. He is the author of The Iranian Metaphysicals: Explorations in Science, Islam, and the Uncanny (Princeton University Press, 2018) and is currently writing a book about the theology of Satan after the Islamic Revolution.

Alicia Izharuddin is currently a fellow at the International Institute for Asian Studies at Leiden University in the Netherlands where she is finishing her book on the print culture of romance in Malaysia and the formation of affective counterpublics.

This event is free and open to everyone. RSVP here: http://bit.ly/halaltalks.


If there is anything we can do to make this event accessible to you, please contact islamicstudies@umich.edu. Please be aware that advance notice is necessary as some accommodations may require more time for the university to arrange.
Institute for the Humanities
Suite 1111
202 S. Thayer Street
Ann Arbor, MI 48104-1608
humin@umich.edu
Gallery hours: M-F 9am-5pm
734.936.3518
734.763.5507
Sitemap
Facebook Twitter Youtube Instagram