Watch for Free: Muslim Horror films from across the globe Oct 1-31
Multiple Dates 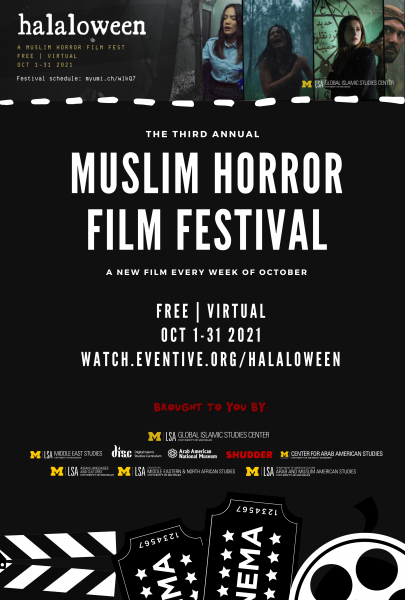 Welcome to Halaloween! From Oct 1-31, GISC will be streaming Muslim horror films from across the globe for free. Films will each be available for one week in October, but available to pre-order anytime at: https://myumi.ch/wlkQ7.
__________________

From Oct 29th to Nov 5th, stream the Indonesian horror film Impetigore on demand at watch.eventive.org/halaloween. Pre-order the film anytime, and check out the rest of the months Halaloween Horror selection!

Down on her luck, Maya learns that she may inherit a house in her ancestral village. But when Maya returns to the village with her loyal best-friend, Dini, she’s unaware that the community has been trying to kill her to remove the curse that's plagued them for years. As she unravels the complicated truth of her past, Maya finds herself in a fight for her life. A SHUDDER ORIGINAL.

Join us the last week of October for a panel discussion on all things Halaloween.
Check our Facebook or Twitter for more information.
__________________

The annual Halaloween: A Muslim Film Festival is presented by the Global Islamic Studies Center (GISC) at the University of Michigan.

What's Halaloween? In 2019 during the month of October, we launched the first ever Muslim Horror Film Festival: Halaloween. Halaloween screens horror films from across the globe that were made by, for, or about Muslims with the hopes of understanding ‘What scares Muslim audiences? Are horror movies halal?’. The previous Halaloween Festivals featured A Girl Walks Home Alone At Night, Dachra, Siccin 4 and more.

This year we are hosting the festival online and screening one film a week for the month of October. We're giving you the remote and allowing viewers to watch on their own time: each film will be available for a whole week. We're also inclusive of everyone's film needs: from new horror fans who close their eyes through most of the films, to those who love the gore - we've got films for everyone! Check the Halaloween Horror Rating in the description of each film for a better sense on how scary each film will be.

The festival remains free, and will come to you wherever you are (though some films may not be available in certain countries). Films will be unlocked online each week of October, and viewers will have the week to watch each film. We'll wrap up the month of October with a live panel discussion on Muslim Horror, the use of Islam and the Quran, and how each region differs in its creation of horror films (sign up to our newsletter below to stay updated on this event, or check our social media).


Want to hear about similar events from U-M Islamic Studies? Sign up for the GISC Newsletter ( https://myumi.ch/nbW83)! We send out a monthly newsletter in collaboration with the Center for Middle Eastern and North African Studies, and the Digital Islamic Studies Curriculum.

Stay tuned on our upcoming events by following our socials here: