Artist Joan Linder is best known for her labor-intensive drawings that transform mundane subjects into conceptually rich images. For this exhibition, she focused on a toxic dumping site near Willow Run airport and two near Niagara Falls. Linder draws in her car, and also makes rubbings from the grounds on location. All three drawings will occupy vitrines that also contain an assortment of hand-copied documents relating to the specific context and history of the locations in question. On the walls, there will be two large rubbings: one from a radioactive parking lot on Niagara Falls Boulevard, the other from the place where the radioactive spoils pile was kept before being shipped to Michigan.

For over a decade Paul Vanouse and Joan Linder have used copying respectively in their work. Vinouse uses reverse engineering of the the DNA fingerprinting process to create unexpected images in his cutting edge BioArt practice. Linder has been working on Toxic Archives, an ongoing series where she creates a hand-drawn archive of copied pages from public archives documenting America’s toxic landscapes. The copy, an act of both reverence and irreverence, used to unpack, point fingers and make discoveries ultimately connects these two artists, colleagues and life partners.

This exhibition looks at three toxic landscapes and the ways in which they are interconnected. Two are in Niagara Falls, New York. The third is in Michigan. I have been looking at Western NY landscapes, exploring Niagara Falls, and doing archival work for the past three and a half years, drawing the resulting documents and observations, using the act of drawing to uncover the toxic history buried the archives, as well as the land.

Early into my my research, I discovered that Buffalo and Niagara Falls had both been instrumental in the assembling of the first atomic weapons. Before Oak Ridge, Hanford, Los Alamos, or the existence of the Department of Energy and the Nuclear Regulatory Commission, the development of atomic bombs took place in private laboratories, under top secret contracts from the Federal Government. In Western NY, companies such as Linde Air Products, the Eletro Metallurgical Company, and Simonds Saw and Steel formed and processed uranium rods for the Manhattan Project. These processes produced a fair amount of radioactive waste.

Some of that waste was shipped offsite to waste facilities in the western United States. Some was drained into local streams and sewers, pumped into local wells, buried in local landfills, stored in drums on nearby public and private properties, mixed into the fill that was used to pave local roads, driveways, and graveyards—or simply left where it was. To this day (the half-life of uranium is 4.5 billion years), Niagara is peppered with radioactive hot spots.

Buffalo/Niagara also has a number of Formerly Utilized Sites Remediation Action Plan (FUSRAP) sites, where radioactive materials left over from the Manhattan Project have been consolidated and maintained. These sites, which include the Niagara Falls Storage site, West Valley, Seaway 1 & 2 are managed by the Army Corp Eastern District. But what becomes of nuclear waste that’s discovered, today, unearthed in a new construction project such, found in a graveyard or under a parking lot.

This summer, the Niagara Gazette and The Public (an independent newspaper in Buffalo), both published stories about a radioactive spoils pile that was discovered across the street from the newly opened train station in Niagara Falls. At the time, reporters were told that the material would be disposed of out-of-state. According to the Niagara Gazette, the waste was shipped to Wayne Disposal, a commercial hazardous waste landfill in Bellville, Michigan. WD is one of nineteen active hazardous waste sites in the country. But oddly—even absurdly—enough, the Northeast has its own active hazardous waste site: Chemical Waste Management, which is located in Lewiston, New York, less than ten miles away from the town of Niagara Falls. (To bring things full circle: CWM occupies the former location of Lake Ontario Ordinance Work, an army site that was once used to receive Manhattan Project uranium mined in the Belgian Congo, and is adjacent to FUSERAPS’s Niagara Falls Storage Site.)

Among other things, this exhibition takes that absurdity as its starting point, and looks examines the disconcerting practice of transporting radioactive waste across state lines in order to “clean up” a region that is also a radioactive waste site itself.

The exhibition consists of three long, scrolling graphite landscape drawings of the sites as they are today. One is the Modern Landfill and Tomato Hothouses site in Lewiston, NY—it, too, is located on the former LOOW site, near the Niagara Falls Storage Site. The second is a stretch of Niagara Falls Boulevard that includes the local Best Western, Rapids Bowling, and the Greater Niagara Building Center (a wholesale supplier for local builders and contractors), all of which have radioactive parking lots. The third drawing depicts the Willow Run Airport and Wayne Disposal in Belleville, Michigan, a former farm camp for boys turned into the B-24 bomber plant during WWII and now a hazardous waste landfill and airport. All three drawings will occupy vitrines that also contain an assortment of hand-copied documents relating to the specific context and history of the locations in question. On the walls, there will be two large rubbings: one from a radioactive parking lot on Niagara Falls Boulevard, the other from the place where the radioactive spoils pile was kept before being shipped to Michigan.

Toxic—our relationships to the environment, our communities, and one another rest on a hidden pivot. Like a seesaw, our everyday lives hang in the balance, left in the lurch, unless we are constantly vigilant. There is that we think we know to be true, what they tell us, so we sleep soundly. And then, there is the underbelly of it. Silent yet pervasive as silt, the cumulative baggage follows us around, with the shelf life of 4.5 billion years, just like uranium. We think we’ve put it behind us, cleaned it up, buried it, and we are on top of it.

Until, carelessly coasting down the park hill, we hit the big swerve, and the handlebars knock the wind out of us—the big wipe out.

Joan Linder’s exhibition Atomic Highways and Byways looks at three toxic landscapes—two in Niagara Falls, New York, and the third in Belleville, Michigan. Instrumental in the assembling of the first atomic weapons, Buffalo and Niagara Falls are strewn with radioactive hot spots. Wayne Disposal, in Belleville, Michigan, is a commercial waste landfill, where other states dump their hazardous waste. It is one of nineteen active hazardous waste sites in the country.

For the past three-and-a-half years, Linder has been exploring these Western landscapes, attempting to uncover their toxic history. As part of her project, she recreates through drawing facsimiles of the trail of official documents that trace this dark past just below the surface. The act of drawing itself becomes a means of excavation, finding proof, following the spiral.

Linder also catalogues her observations of these sites with intimate drawings made sitting in her car for hours, bearing witness at a safer distance. The drawings of the Belleville site were created on location during Linder’s 2016 Institute for the Humanities residency. Large scale charcoal rubbings of the grounds also serve as visual artifacts. Through the meticulous hand-drawn network of her marks, Linder investigates the imprints and trappings of both human and manufactured experience, how each place and piece of information is connected, overlapping, and interwoven. 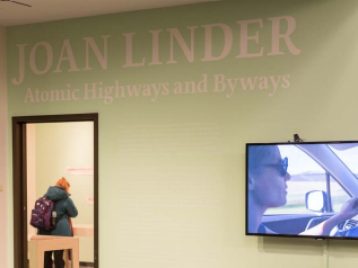 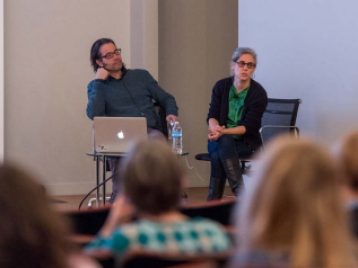 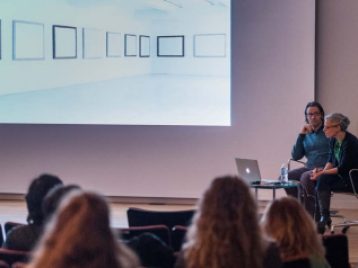 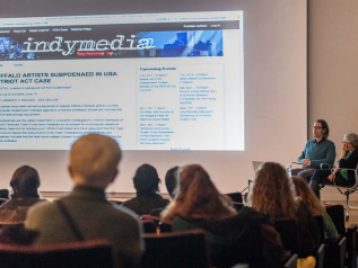 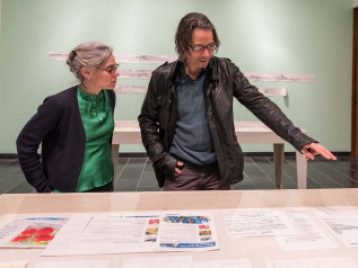 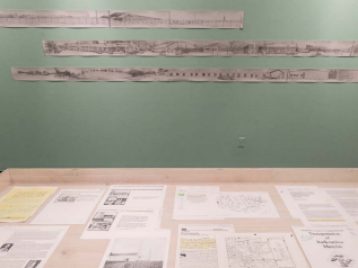 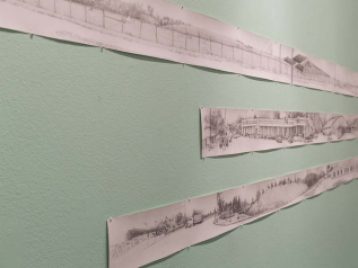 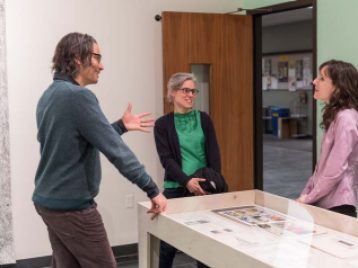 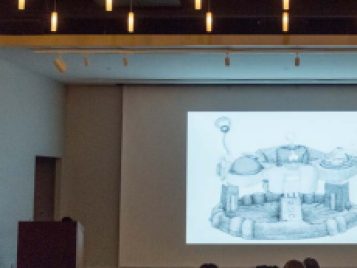 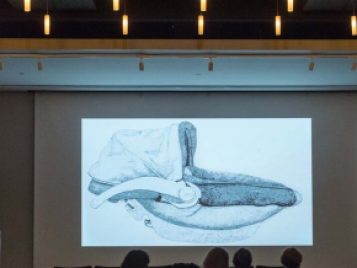 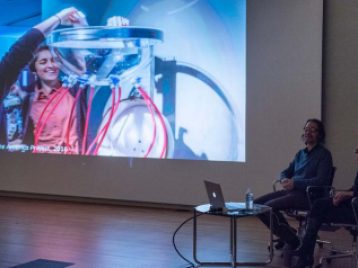 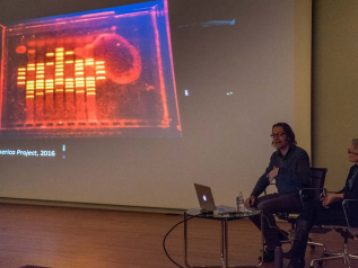 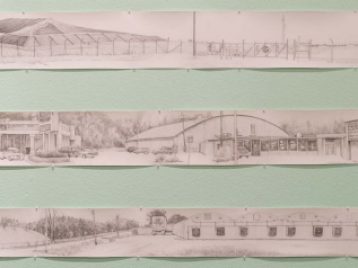 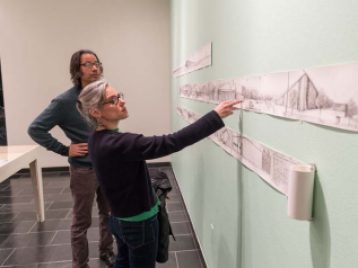 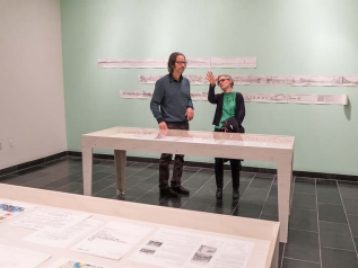 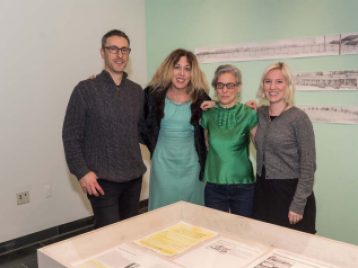