Humanize the Numbers: A Wall in Process

The Common Room pop-ups (short running exhibitions in a non-traditional gallery space) are a relatively new endeavor here at the Institute for the Humanities. When I came on as institute staff in the fall of 2014, Amanda Krugliak, our arts curator, was just delving into programming and exhibitions in this space for the first time. This year, we worked with a variety of artists to make the Year of Conversions come to life in the Common Room. Our collaboration with the campus-wide initiative Humanize the Numbers was, for me, one of the most dynamic parts of the 2016-2017 academic year.

Humanize the Numbers was the brainchild of artist and prison reform activist Mark Strandquist and U-M’s own Prison Creative Arts Project. Humanize the Numbers brought together multiple campus entities in active projects with the goal of illuminating the human element of our current crisis in mass incarceration. With the Common Room installation, we acted as a hub space of sorts, collecting material from several different advocacy groups and prison art workshops—handwritten letters from the AFSC Good Neighbor Project; quilting squares from a workshop at a girls’ treatment center; and hand drawn postcards from prisoners across Michigan. In contrast to a conventional exhibition where all elements are displayed at once and remain unchanged during its duration, we staggered the installation of these materials, adding and subtracting different pieces over time, rearranging elements—in a sense, letting it grow organically over time.

As a curatorial team, we had to think of how to approach this exhibition in a different way than we would approach a purely artistic exhibition and found ourselves asking different kinds of questions. How were we to treat the drawings and letters of prisoners? As fine art? As artifacts? As something in between?

I knew that an important part of effectively curating was being able to separate an emotional attachment to the work in front of you and look at your materials as components of a curatorial (visual) equation. But through our planning meetings with PCAP administrators, visits out to the American Friends Service Committee to pick up letters from inmates, and the postcards designed by prisoners that suddenly arrived in droves in my mailbox (“c/o Ms. Lucy Cahill”), it became clear to me that it was simply not possible to be a neutral presence in this project. The letters I held in my hands were not fine art, not what would conventionally be called a precious object, but they were loaded with meaning and history—each one an individual marker of a person’s lived experience in our country’s incarceration system. The exhibit became what felt like a living entity—layers of materials, examples of self and creative expression, growing and changing as we added more components each week.

The process wall ended up acting as a microcosm for the vital work that happens through the humanities. Besides displaying the artifacts, we hosted lectures by passionate experts, consulted with prison reform advocates, and invited activists to lead workshops in the space. This blending of social sciences, humanities, and arts perfectly symbolized for me the importance of the interdisciplinary work we do here at the Institute for the Humanities. 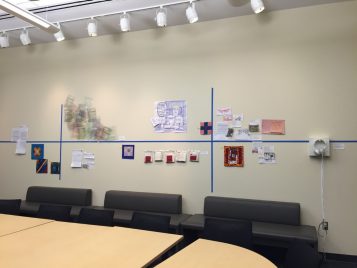 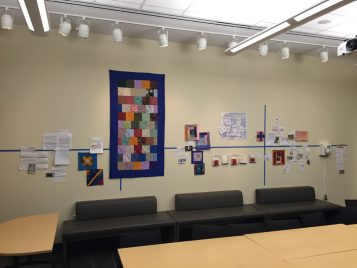 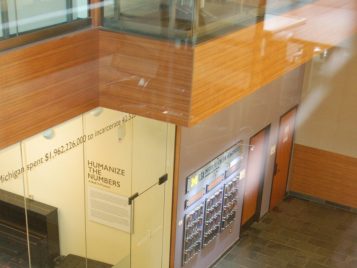 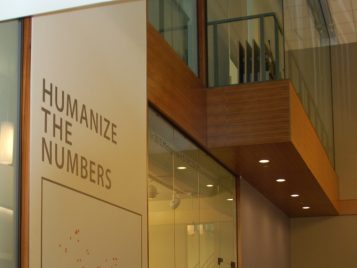 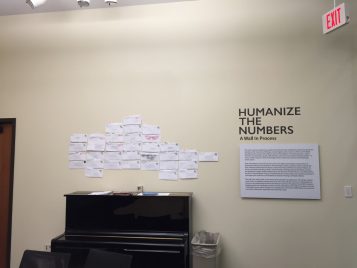 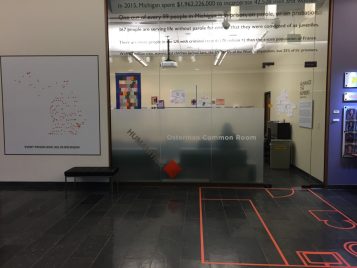 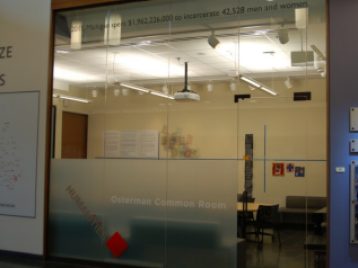 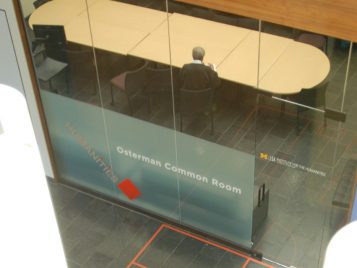