Doug Hall’s immersive two-screen video installation challenges the familiar picture-postcard vision of the Golden Gate with a pair of contrasting perspectives. Emphasizing the monumentality of not only the Golden Gate Bridge, but also the massive container ships that pass beneath it, the installation reveals the bridge as part of an environment that is at once natural and human-made.

Doug Hall is an internationally known artist who has worked for over 40 years in a wide range of media, including performance, installation, video, and large format photography. In the 1970s he became prominent for his work with the media art collective T. R. Uthco, which, among many other works, created the video and installation The Eternal Frame, a reenactment of the Kennedy assassination. In the late 1980s his interests expanded to include large format photography, which has remained central to his practice. His work has been exhibited in museums in the United States and Europe and is included in numerous collections. The recipient of numerous grants and awards, Hall received the 1995 Rome Prize. He is professor emeritus at the San Francisco Art Institute. 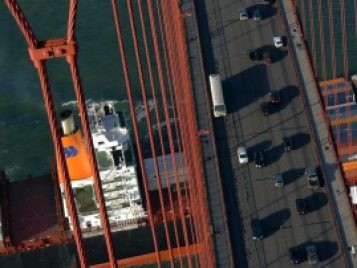