Blind House: Utopia and Dystopia in the Age of Radical Transparency

Blind House: Utopia and Dystopia in the Age of Radical Transparency, by collaborative artists Paloma Muñoz and Walter Martin, is a razor-sharp work that brings into question our ideals of house and home, privacy, and safety.

The exhibition combines photographs the artists have envisioned of houses without windows as well an actual glass house planned for the center of the gallery, revisiting the notion of a glass house as an example of sophistication, luxury, and modernism.

In a darkening era of surveillance and the internet, for Martin and Muñoz, Blind House serves as "a metaphorical solution to the full on campaign against personal privacy."

We live in a house with many windows, all of them problematic. The forty five glass windows offer us views and light but we sometimes wonder who or what might be monitoring us through them. We love to open our windows and breathe the fresh air that filters through the pine forest around us. But we wonder what we might be letting in when we open them.

We love our proximity to nature but nature has of late taken a moribund turn. Arboreal diseases and gypsy moths ravage the hemlocks, maples, and oaks and every new super-storm brings down more weakened trees. The forest looks battle scarred and though Spring brings hope it also brings ticks and rabies. The air is tainted with particulates, the ground water fouled and sunshine promotes cancer.

With Nature as a dubious entity, our dream of living in a house open to nature has been turned against us. We feel exposed and in need of protection: air filters, curtains, UV blockers, radon extractors and water treatment. But as most of us are aware, the most problematic windows in a house are the virtual ones. In our case, if you count our mobile phone, three iPads, Alexi, two computers and two nest cameras, our total number of windows comes to fifty four. Unlike the real windows, these last nine digital windows resist and elude every imaginable treatment.

One approach to understanding our Blind House project is to think of it as the dystopian flower of a utopian seed. In America, that seed was planted in 1949 when Philip Johnson built his famous glass house on a nob in the center of 50 acres in New Canaan, Connecticut (though the original glass house should be credited to the genius of Mies van der Rohe).

Real glass houses are beautiful and sexy. To be an occupant of such a house, until recently, seemed enviable. Glass houses were, in the popular imagination, sanctuaries where the privileged could look out in all directions without moving from one room to another. Philip Johnson said of his glass house: “I claim that’s the only house in the world where you can see the sunset and the moonrise at the same time, standing in the same place. Because that’s an impossibility in any house; you have to walk to another room to see one or the other of those effects. But I get it all the time here in the Glass House.” Walking tour with Philip Johnson, 1991

For that very reason the most important component of a glass house was not the house but the view from it, as Johnson comments later. “Don’t forget, it is more of a landscape park than it is a work of architecture, anyhow.”

The elitism associated with glass houses is not just the expense of the house but the incredible expense of owning the view from it. Even if one owns the view, can one really control it? Today in the age of drones and stealth surveillance the answer would be no.

Philip Johnson would have to come to terms with a view that could look back at him. Not only that, but a view with attitude that could record every detail of his daily life and use it against him. Not surprisingly, the untampered enthusiasm of aspirational mods for a classic glass house has waned. It is difficult to enjoy the continuous 360 degree views from your glass house without being acutely aware of the 360 degrees of continuous exposure.

The true glass house is an anachronism of a bygone era, an era that at this distance looks like a golden utopia. Now when we think of the Glass House it is more often as metaphor for transparency in the age of connectedness. Until recently it was typical to praise this notion of transparency as a positive development. Some social media moguls claimed we were not losing privacy but were instead advancing social evolution by gaining total transparency, that we should strive to be the sort of people that have nothing to hide and that we would be better for it. Others didn’t dispute so much the loss of privacy but suggested that if we couldn’t handle transparency it would be best to stay off the internet and ditch all our devices.

It is ironic the glass house once reserved for the lucky few has morphed into something more akin to a common curse. To the extent that we are connected, we are all encased in this new sort of virtual glass house - a transparent encapsulation that contains everything we are, tethered to an IP address.

This paradigm of the Glass House is one we submit to reluctantly. After all what other choices do we have short of abandoning civilization for some wilderness and taking up trapping or subsistence farming? To exist in this virtual glass house one must learn to embrace the loss of privacy as the cost of being connected. How many of us still imagine that the pictures we post of ourselves and our children on Facebook will only be seen by friends or that our conversations in the privacy of our home are private?

But is such exposure sustainable? Who can hold up to the sort of withering scrutiny, data fleecing and brain hacking that comes from being connected? Well, as it turns out, almost everyone. Though we are all to one degree or another aware that our connectedness comes at a price, we pay it. Because the truth is, for now at least, that our exploitation is more or less painless. Even if we are being used in ways we don’t understand, it is an order of exploitation that can be ignored (until it can’t.)

Cookies, malware, spyware, bots and trolls are just the latest additions to the traditional parasites that live inside our bodies. These new cyber parasites are like our corporal parasites in that they manage to harvest what they need from us without drawing undue attention to themselves.

They depend upon us to go through our day unaware of their presence. They affect us, but in ways that are difficult to quantify. While the latter live off our intestines and skin, cyber parasites feed on and influence our cerebral and emotional states. They sell our habits and tweak our weaknesses and desires. They hack brains and steal votes.

“It is an interesting notion that rather than fight against the losing proposition of security, we should embrace the lack of it in the openness of personally identifiable information”*. (*Marty Nemzow, 'Public Privacy and the Glass House‘).

That was in 2012, only six years ago but what a lot of muck has passed under the bridge since then. In 2012 it was possible to imagine and articulate a utopia of transparency that today sounds naive in the extreme. For us the idea of 'embracing' openness in the public sphere is tantamount to “the trifling inconvenience of having your brains blown out”*.Louisa May Alcott, ‘Behind a Mask’

We are a new sort of unregulated natural resource, a raw material, for every type of voyeur, be it entrepreneurial, governmental, or sexual, under the sun. They gather then collate and file everything. They trade or sell what’s of value now but store and hoard everything else on the principle that every datum will have its day.

The ever expanding catalogue of surveillance devices reads like a bestiary. Perhaps it would be paranoid to imagine hummingbird drones hovering outside our kitchen window while little bug- size Black Hornet helicopters flit about the garden. But as I write this, Heathrow airport is closed because of drones in its vicinity. Drones keep getting smaller and stealthier. Soon enough there will be house spider drones and butterfly drones. Privacy, if you have any in the future, will be the demoralizing consequence of your status as a low value target. Only nobodies will escape scrutiny.

Connect through a VPN and be careful what you write and say. Cover your windows and tape over the key holes in your devices but you will still be followed. Not only will your algorithms be refined and updated but they may take into account your evasive maneuvers and mark them ‘suspicious’.

Blind Houses are based on real houses that shelter families like ours. People, who, we imagine, came here lured by the promise of space, tranquility and fresh air but who now find themselves more or less housebound and tethered to an invisible system of cables and culling devices. By photographing their homes and removing their windows and doors we are visualizing the polar opposite of a glass house: an opaque encapsulation that protects a secret life within.

It is a symbolic remedy in lieu of a real one that doesn’t exist. Privacy is an artifact or a concept that can be discussed in historical terms but as an experience it is no longer with us. Things are so different now.

Our project is a visual and metaphorical one- to replace glass with wood or stone. We have already removed hundreds of windows and doors and there are so many more houses to go. But it doesn’t really matter. Our project, of course, does not fix anything. Our blind houses are just visual protest metaphors, opaque counter points to the Glass House paradigm. As a sociopolitical statement our project is hardly more than a gesture of faint defiance in the face of an indifferent data tsunami that sucks everything up in its path and leaves chaos in its wake.

Mar 25, 1-2pm
LOOK 101: Seeing Art in an Instagram World
How to Look at the Art of Walter Martin & Paloma Muñoz 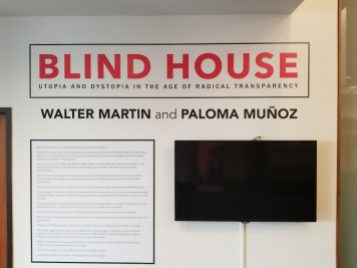 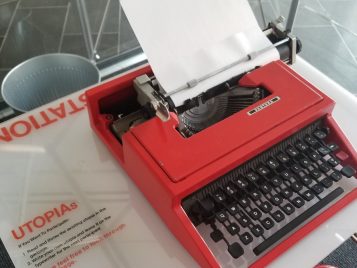 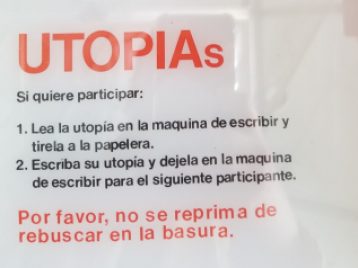 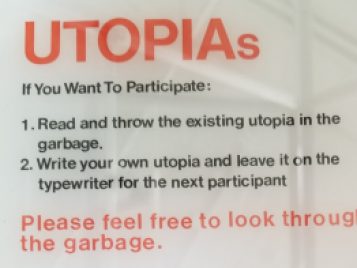 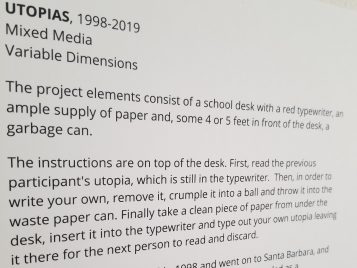 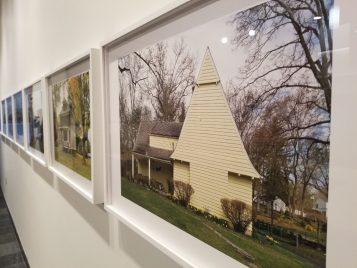 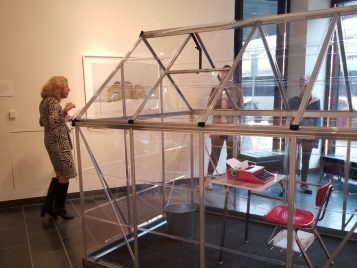 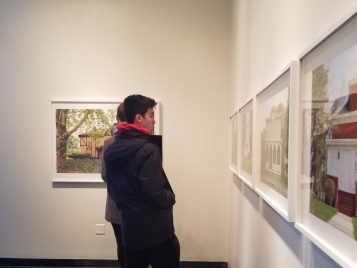 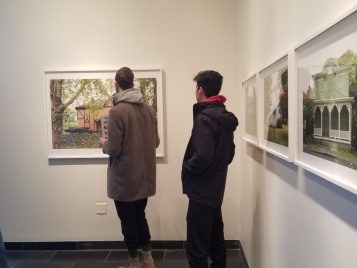 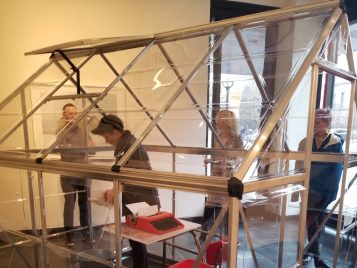 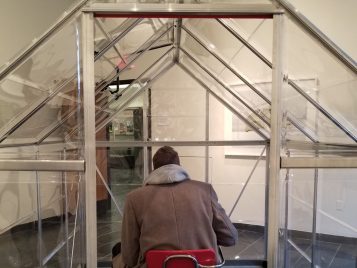 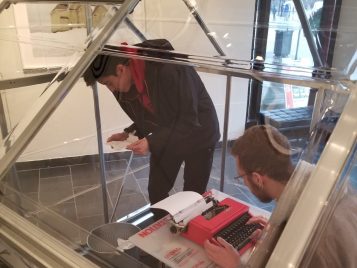 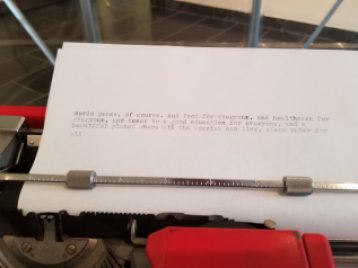 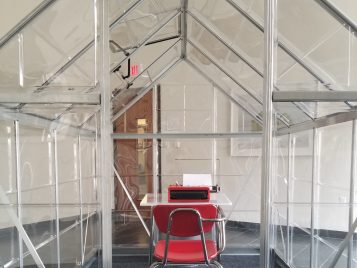 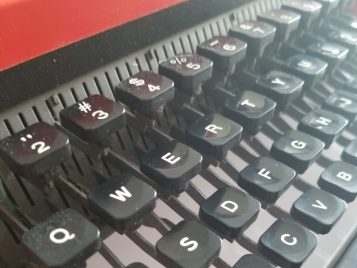 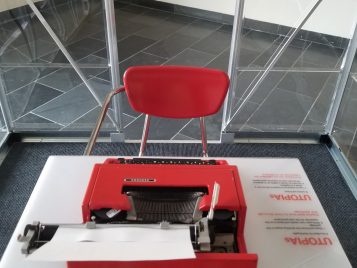