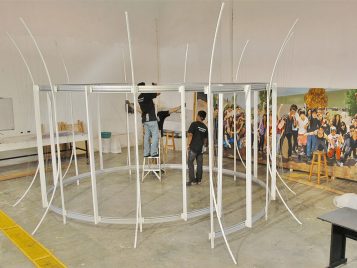 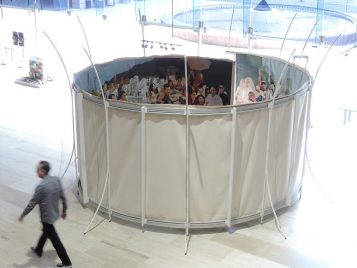 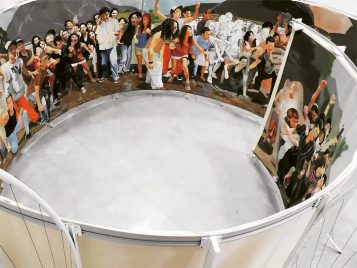 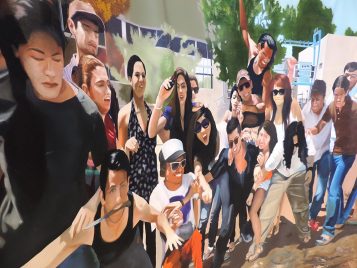 La Pelea/The Fight is a 46-foot panoramic oil-on-canvas. At the center of the “picture” and surrounded by a jeering crowd, the viewer becomes literally and conceptually involved as the one who is about to fight and defend themself. But depending on where the viewer is standing in the space, a different perspective can emerge, suggesting that even a public, collective experience is highly subjective. La Pelea/The Fight references demonstrations, injustices, urban public aggressions, lynchings and perhaps empathy, allowing the viewer access to a new experience of reflection.

Born in 1977 in Mexico, Diaz considers image and information, and how the media and individuals represent stories to a different end. His immersive Panoramic paintings allow for the viewer to be witness, gaining a different perspective or experience depending on the positioning in relation to the work. His work is so original, fresh and contemporary, while at the same time harkening back to the traditions of Mexican muralists like Diego Rivera.

Mexican visual artist Salvador Diaz’s La Pelea/The Fight invites viewers to step inside a painting as participants in a fight, with a 360-degree view of a 42-foot canvas roughly six feet high surrounding them.

The intricate outer support structure of the painting overtakes the gallery like a fallen spaceship, a carnival ride, or perhaps a portal through time. One gets the impression that the gallery can barely contain it. There is an exhilarating moment of wonder and awe as to what this thing is exactly, and what we will encounter within.

La Pelea/The Fight is a panoramic contemporary painting project that intends to engage the viewer in a new experience by literally placing them in the center of the picture and the action, seeing themselves surrounded by a circling crowd of onlookers. The viewer is implicit in the drama, both positioned as hero and perpetrator. Conceptually, it is their presence that brings the work to life and sets the events in motion.

Like much of Diaz’s work, La Pelea/The Fight brings into question the reliability of the narrator and the complexity of stories, especially as they pertain to the manipulation of facts and suggestions of criminality by the media and those in positions of power. It is timely in an era defined by polarity and politically driven half-truths and fictions.

As if recalled in a dream, the many peering faces in the surrounding painting evoke memories of school yard bullies and less-than-innocent bystanders, leaving us with uncertainty as to what happened exactly.

La Pelea/The Fight continues the long traditions of Latinx muralists like Diego Rivera and Jose Clemente Orosco…overtly political, in opposition to those in power, and reflective of the struggles of everyday Mexican people. The work embraces the masses, the value of their work, the resonance of their collective voices, and their capacity for protest as a means to effect social change.

Salvador Diaz’s expansive vision in La Pelea/The Fight reminds us that it is the necessary tension of a myriad of perspectives that bring us closer to some truth, rather than the singular view from where we are standing.