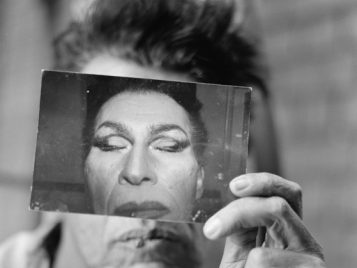 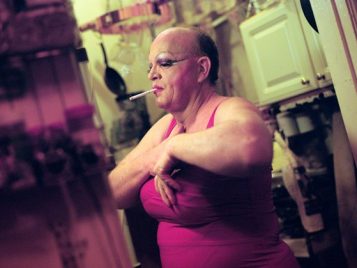 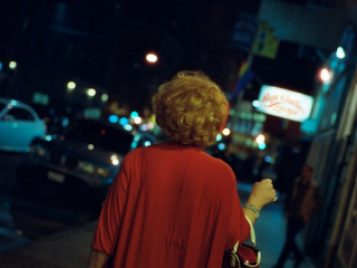 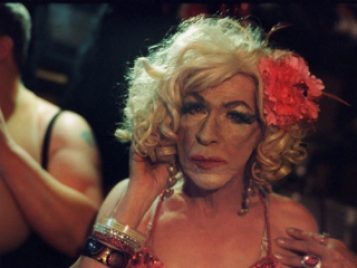 BEAUTIFUL BY NIGHT
by James Hosking

"Beautiful By Night" Screening
Wednesday, February 16, 6:30pm
Institute for the Humanities Gallery, 202 S. Thayer
Screening of James Hosking's documentary Beautiful by Night. Includes a conversation with the artist and appearances by two of the film's protagonists: Olivia Hart and Donna Personna.

About Beautiful By Night
I lived in San Francisco’s Tenderloin neighborhood from 2010 to 2018, during which time I developed the Beautiful By Night photo series and documentary film. The work is about the veteran drag performers at Aunt Charlie’s Lounge, a small bar that has had an outsized influence on San Francisco’s LGBTQ+ community for more than twenty years. Sadly, it is now the last gay bar in the area. The project captures the performers Donna Personna, Olivia Hart, and Collette LeGrande as they transform at home, backstage, and onstage. It is a candid exploration of aging, identity, and labor. My heartfelt thanks to Donna, Collette, and Olivia for their generosity and friendship, and to Amanda Krugliak for the opportunity and collaboration in bringing the exhibition to life. -James Hosking

About James Hosking
James Hosking is a Chicago-based photographer, filmmaker, and visual artist. His portraiture explores underseen LGBTQ+ communities and subcultures. He often combines multiple images to explore sequentiality and juxtaposition. In recent work, he prints on fabric and acrylic, as well as collages with archival material, vernacular photos, and found textures. His work was included in the 2020 exhibition Come to Your Census at the Yerba Buena Center for the Arts in San Francisco, and he had a multi-year collaboration with the city’s Tenderloin Museum that featured screenings, public programming, and a solo exhibition. His work has been screened internationally and has appeared in The New York Times, The Washington Post, Mother Jones, and many other publications. He collaborated with National Book Award-winning writer William T. Vollmann on a portfolio about transgender women for Port magazine. His work has received support from the Economic Hardship Reporting Project and San Francisco’s Grants for the Arts program. He is currently a 2022-2023 HATCH resident at the Chicago Artists Coalition.

Curator's Statement
The artist and documentarian James Hosking lived in San Francisco’s Tenderloin neighborhood from 2010 to 2018, during which time he created the series of photographs and video Beautiful By Night. The exhibition presents intimate portraits of three long-time drag performers at Aunt Charlie’s Lounge, a small bar that has been so meaningful to San Franciso’s LGBTQ+ community for decades, and is now literally the last surviving gay bar in the neighborhood.

The project is a deftly crafted and sensitive homage to performers Donna Personna, Olivia Hart, and Collette LeGrande. The images show us complicated, sometimes messy, multi-dimensional people in their environments, taking us from backstage to front and center, from the routine to the out of this world. Hosking’s focus on small details, the nuances of color, or the particularity of light, result in an expansive vision.

As viewers, we feel the closeness of Hosking’s relationships to Donna, Olivia, and Collette, and, in turn, we also feel for them. They are the protagonists of their own stories, both everyday and extraordinary, and we are their rapt audience.

Beautiful By Night also reveals our skewed perceptions and value judgements in regards to aging, identity, class, and work.

And with the beauty of each image, we are reminded of the darkness...the erasure of a vibrant community, a place so rich in history and full of life, amidst the fallout from dot.com takeovers and pandemics.

Beautiful By Night from James Hosking on Vimeo.