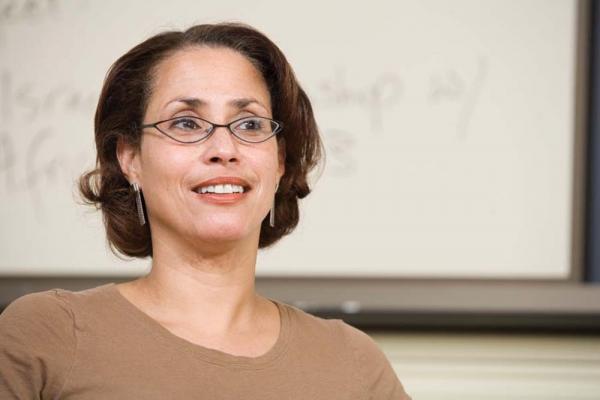 Why did photographers in the nineteenth century take pictures of slaves? What were they looking for, in the faces and bodies of those in bondage? What, if any, aesthetic, cultural and racial understanding did these photographers bring to their craft? This discussion will explore these questions in the work of Louis Vossion, a French photographer commissioned by his government to visually recreate the “types” of people living in Khartoum, Sudan, in 1882. With over 150 photographs, Vossion created a visual encyclopedia of a city full of slaves, a city that in 2 years' time would be completely changed by the Mahdiyya rebellion. These pictures thus form a museum by themselves, an ode to a world that was, in Vossion’s lifetime, to be completely and violently changed.

Eve M. Troutt Powell is the Christopher H. Browne Distinguished Professor of History and Africana Studies who teaches the history of the modern Middle East. As a cultural historian, she emphasizes the exploration of literature and film in her courses. She is the author of Tell This in my Memory: Stories of Enslavement from Egypt, Sudan and the Ottoman Empire (Stanford University Press, 2012), A Different Shade of Colonialism: Egypt, Great Britain and the Mastery of the Sudan (University of California, 2003) and the co-author, with John Hunwick, of The African Diaspora in the Mediterranean Lands of Islam, (Princeton Series on the Middle East, Markus Wiener Press, 2002). Troutt Powell received her BA, MA and PhD from Harvard University. Prior to coming to Penn she taught for ten years at The University of Georgia. She has received fellowships from the American Research Center in Egypt and the Social Science Research Council, and has been a fellow at the Institute for Advanced Study in Princeton and at the Radcliffe Institute for Advanced Study. In 2003 she was named a MacArthur Foundation Fellow.

This event is part of the Thursday Series of the Eisenberg Institute for Historical Studies. It is made possible by a generous contribution from Kenneth and Frances Aftel Eisenberg.