Fighting for Our Rights: Three Young Women Facing Southern Racism in the 1960s 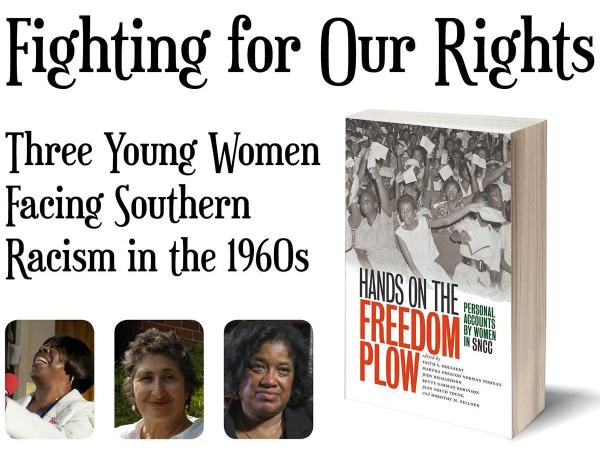 In the 1960s, when the Student Nonviolent Coordinating Committee (SNCC) was on the front line of the civil rights movement in the South, Bettie Mae Fikes, Marilyn Lowen, and Martha P. Noonan were there, too.

They will share their experiences at “Fighting for Our Rights: Three Young Women Facing Southern Racism in the 1960s.” This 2019 Martin Luther King Jr. Day Symposium is presented by the Department of History, Department of Afroamerican and African Studies (DAAS), and Eisenberg Institute for Historical Studies, with additional support from the Kalt Fund for African American and African History.

Bettie Mae Fikes was born in Selma, Alabama, and began singing gospel alongside her mother at age four. At sixteen she became a student leader for SNCC, eventually performing with the SNCC Freedom Singers. She was jailed for several weeks in 1963 for protesting during the voting rights struggle in Selma. Ms. Fikes has graced the stages of Carnegie Hall, the Newport Jazz Festival, and the Library of Congress, as well as performing for Democratic National Conventions in 1964 and 2004. She has performed with Joe Turner, Lightnin’ Hopkins, Albert King, James Brown, Bob Dylan, and Mavis Staples, among others.

Marilyn Lowen is a poet, writer, teacher and lifelong human rights worker. Born in Detroit in 1944, she began protesting racial injustice at eight years old. In high school she picketed Woolworth’s in downtown Detroit in solidarity with SNCC sit-ins in 1960-1961. At Bennington College she started a civil rights group to support SNCC and the Northern Student Movement. She left school to work full time in the movement, first with NSM in Harlem, next in SNCC’s Atlanta photo department, then moving to Tougaloo, Mississippi, to continue working with SNCC and the Child Development Group of Mississippi. She relocated to New York City in 1968, finishing her undergraduate and master's degrees, and teaching in the city’s public schools at all levels.

Martha Prescod Norman Noonan became involved in Students for a Democratic Society and SNCC while an undergraduate at the University of Michigan in the 1960s. Born and raised in Providence, Rhode Island, Noonan’s family moved to Detroit after she graduated from high school. An undergraduate history major at the University of Michigan, she earned a master’s degree in history from Wayne State University and for over two years pursued a PhD in history at U-M until a series of family emergencies interrupted her studies. Ms. Noonan coedited Hands on the Freedom Plow: Personal Accounts by Women in SNCC (University of Illinois Press, 2012).