Austrian writer and playwright Ferdinand Schmalz visited the Department of Germanic Languages and Literatures on Novemer 27, 2018, to read from his play “dosenfleisch” (“canned meat”), translated by Neil Blackadder. Schmalz is currently one of the most successful German language writers and playwrights, who is well established in the German theatre world and beyond. His first play “am beispiel der butter” was staged 2014 at the Burgtheater in Vienna. In the last few years he has written an incredible number of new plays: “dosenfleisch,” “herzerlfresser,” “der thermale widerstand,” and “jedermann (stirbt).” His plays are staged at the leading theatres in Germany, Switzerland, and Austria. Amongst others at the Burgtheater Wien, Deutsches Theater Berlin, Schauspiel Leipzig, Schauspielhaus Frankfurt, Schauspielhaus Zürich.

Schmalz has won the most prestigious awards in the German speaking countries for his plays and texts: amongst others the Ingeborg Bachmann Preis (2017), the Retzhofer Dramapreis (2013), and the “Nestroypreis” (2018).

Schmalz is a a “Sprachartist mit Lebensmittelschwerpunkt” – a language artist with food focus. This phrase probably summarizes best the quality of his plays: Everything in his texts evolves from language. He writes his plays on the basis of theoretical and philosophical texts, but transforms these texts into simple food-metaphors – on the example of the butter, canned meat etc.

The reading at our department was staged together with faculty and students from the Theatre & Drama Department at University of Michigan. Malcolm Tulip (Prof. of Theatre), Kris Danford (Prof. of Voice and Speech), Sarah Prendergast (senior Acting), and Liam Loomer (senior Acting) read from the English translation of the play.

Last but not least, the reading at our department was not just the world premiere of the English version of “canned meat,” but it was also the very first reading of a play by Ferdinand Schmalz in the US. We are sure that more will follow within the next years… 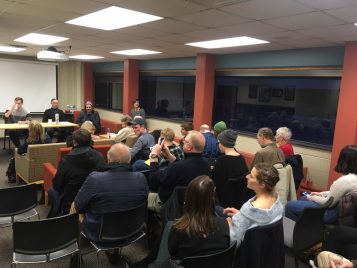 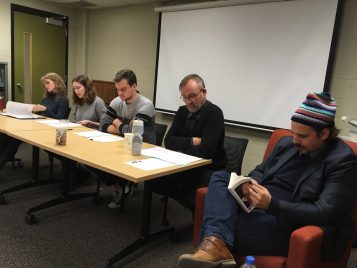 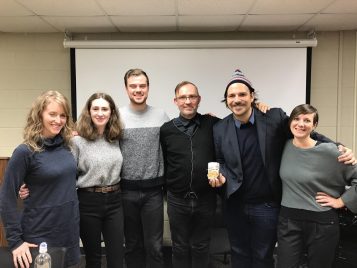 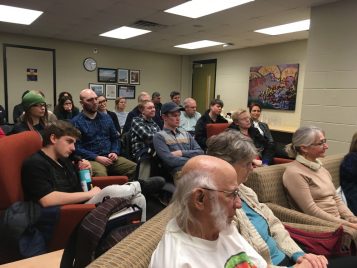