On Thursday, November 15, 2018, Gloria Calderón Kellett, Executive Producer and showrunner of Netflix’s One Day at a Time, and Miranda Banks, Associate Professor of Film and Media Studies at Emerson College, staged the second installment of the Department of Film, Television and Media’s Critical Conversations series, speaking to a full house in the Hatcher Library’s Gallery Room 100.

Calderón Kellett began the session by describing her journey as the daughter of Cuban immigrants who pursued her passion for writing to the prestigious position she now holds as one of America’s leading television writers and producers. As an undergraduate at Loyola Marymount University, she was awarded a Kennedy Center/ACTF Award for her first play, Plane Strangers. After receiving her Master’s degree in Theatre from the University of London, she returned to Los Angeles where her work as a writers’ production assistant eventually led to her landing writing and producing jobs on such shows as CBS’s How I Met Your Mother and Rules of Engagement, ABC’s Mixology, CW’s IZombie and Jane the Virgin. Calderón-Kellett also chronicled her frustration as an actor where she frequently found herself competing for the part of the drug dealer’s girlfriend or sister. The lack of diverse parts for Latinx actors fueled her desire to create rich, diverse roles for women and men of color.

Banks followed by discussing her book The Writers: A History of American Screenwriters and their Guild (Rutgers UP, 2015) which serves as the most comprehensive text on the history of writers working in the film, television, and streaming media industries in America. Ironically, among the 50 in depth writers’ interviews Banks conducted is one with television legend Norman Lear, who selected Calderón Kellett to reimagine his series, One Day at A Time. Banks also presented her research regarding the need for racial, ethnic, gender and sexual diversity both behind and in front of the camera, in programming and film content and in film and media schools. 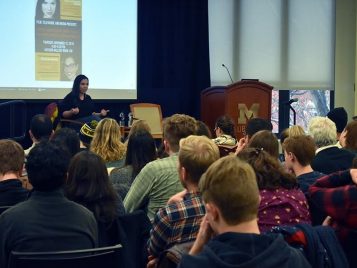 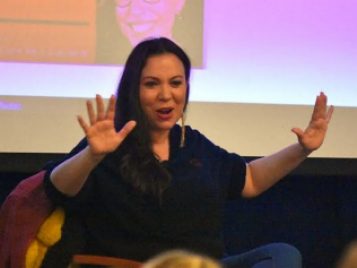 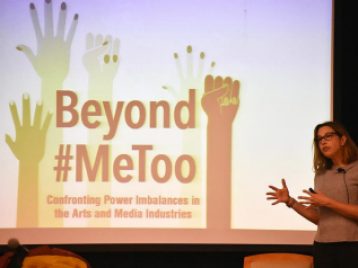 FTVM Chair Yeidy Rivero then opened the floor to a wide range of questions posed primarily by the students in attendance. To the many students who were seeking advice on how to break into the entertainment industry, Calderón-Kellett emphasized the need to learn the business from the bottom up, whether getting that first job as an assistant on a television show or film, at a production company, talent agency or studio. To young writers, she especially stressed the importance of writing every day, honing one’s craft and building a portfolio. Banks answered questions on how production programs like FTVM can create equality of opportunity in the classroom and a culture that fosters diverse storytelling that in turn can lead to change the face of the industry itself. Calderón-Kellett noted how having one woman in a room was not enough to alter the system. But when the balance is fifty-fifty, the atmosphere improves for everybody. Both Banks and Calderón each commented on how treating everyone with respect is vital every step of the way, from the classroom to that first job to when you attain that lofty position you are seeking.

The pairing of Gloria Calderón Kellett and Professor Miranda Banks perfectly illustrated the purpose of the Critical Conversations series that brings together artists and scholars to explore current issues from their unique perspectives.

The day following the conversation, Gloria Calderón Kellett conducted a working session with Jim Burnstein's FTVM 427 class, while Miranda Banks conducted an open session in which she talked to interested students about diversity in film schools and within the professional media industry.

Department Chair Yeidy Rivero poses with Gloria Calderón Kellett, Executive Producer and showrunner of Netflix’s One Day at a Time, and Miranda Banks, Associate Professor of Film and Media Studies at Emerson College.