IF THESE WALLS COULD TALK

Screening and Q & A with Co-Director/Writer, Nancy Savoca 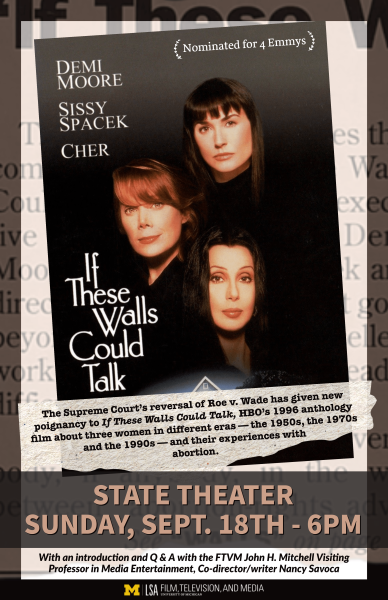 Released in 1996, HBO’s anthology film If These Walls Could Talk is now, nearly 30 years later, more pertinent and timely than ever following the Supreme Court’s reversal of the landmark Roe vs. Wade decision. Demi Moore, Sissy Spacek and Cher each star in segments set in the 1950s, 1970s and 1990s which dramatize how three women make an agonizing decision to deal with an unplanned pregnancy. Ripped from today’s headlines, what makes the film special and continually relevant, as one reviewer wrote, is “the film is less about the wider political and ethical debates in which the issue of abortion is usually embedded, and more about the intimate nature of such decision-making in a woman’s life."

Co-directed and co-written by FTVM's John H. Mitchell Visiting Professor in Media Entertainment, Nancy Savoca, who will be in attendance for an introduction and Q & A.