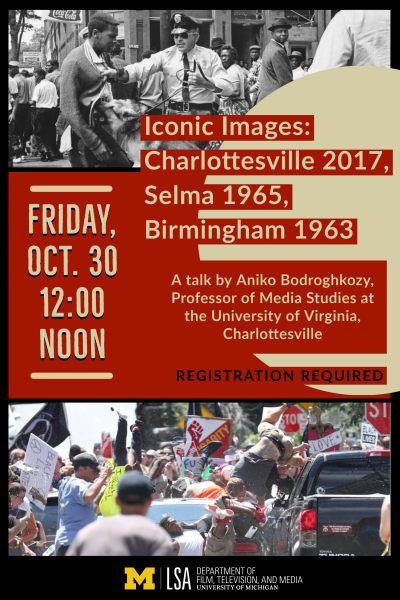 The Martin Luther King-led Birmingham and Selma campaigns resulted in iconic photographic images that to this day signify “the civil rights movement”: typically those images feature empowered, active whites and victimized, powerless blacks. The events of August 11th and 12th during Charlottesville’s “Summer of Hate” have also produced a group of iconic images that the mass media relies on to signify the violent and emboldened racist hatred of the “Unite the Right” rally and its aftermath. In analyzing and comparing the most frequently circulated photographs, I want to suggest a similarity in the narrative that these frequently circulated photos tend to tell about the struggle for racial justice. A photo of the terrorist car attack that killed Heather Heyer won the Pulitzer Prize. Why? What is this horrifically chaotic, violent, almost visually incomprehensible photo communicating? Why is this image reproduced over and over again? How is it thematically and visually similar to iconic images from the civil rights era? How and why does it matter that our photographic record encourages us to remember key events around race and white supremacy in particular ways?

Aniko Bodroghkozy is a Professor of Media Studies at the University of Virginia in Charlottesville where she has been on faculty since 2001. She is a media historian with a particular focus on American television, the social change movements of the 1960s, media audiences and reception practices in historical context, and the development of television journalism in the 1960s.
Department of Film, Television, and Media
6330 N. Quad
105 S. State St.
Ann Arbor, MI 48109-1285
ftvm.info@umich.edu
734.764.0147
734.936.1846
Sitemap
Facebook Twitter Youtube Flickr