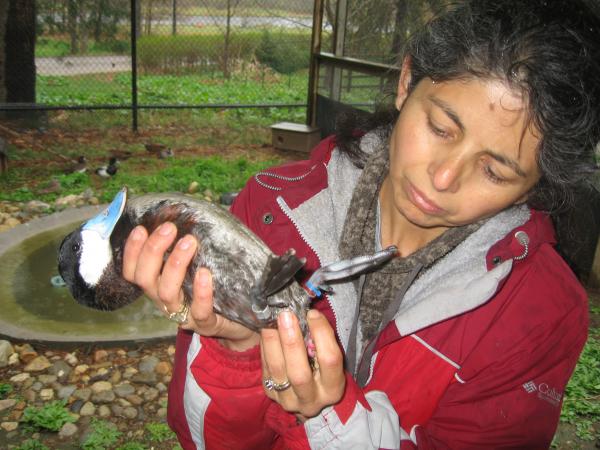 Genital evolution in Birds: Losing the penis and winning the Battle.

Most birds do not have a penis, and most ornithologists have not thought about bird penises much. However, evolutionarily, the loss of the penis in birds is an extremely significant event: why lose an organ that seems so handy to get sperm close to female eggs? Dr. Brennan will discuss some hypotheses as to why this loss may have occurred and talk about her work describing variation in the genitalia of avian species that have retained their ancestral penis, and experimental manipulations that have revealed the surprising role of male-male competition in genital morphology. In addition, Dr. Brennan will talk about her research on how sexual conflict has driven extreme modifications of the female genital morphology in ducks, where females suffer great direct and indirect costs from forced copulations and they have evolved complex vaginas that prevent the full eversion of the penis, and reassert female control over paternity. An evolutionary arms race is playing out in the complex genitalia of waterfowl, with some species having extremely exaggerated genitalia. One possible resolution of such conflict is disarmament, and Dr. Brennan will discuss how the avian penis loss may have been driven by female choice for increased sexual autonomy, giving females the upper hand in the reproductive battle.
Ecology And Evolutionary Biology
1105 North University Ave
Biological Sciences Building
Ann Arbor, MI 48109-1085
eeb-webinfo@umich.edu
EEB Internal
EEBlog
Subscribe to e-news
ph: 734.615.4917
fx: 734.763.0544
Sitemap
Facebook Twitter Youtube Instagram