Idris Robinson, Ph.D. candidate in the Department of Philosophy at the University of New Mexico 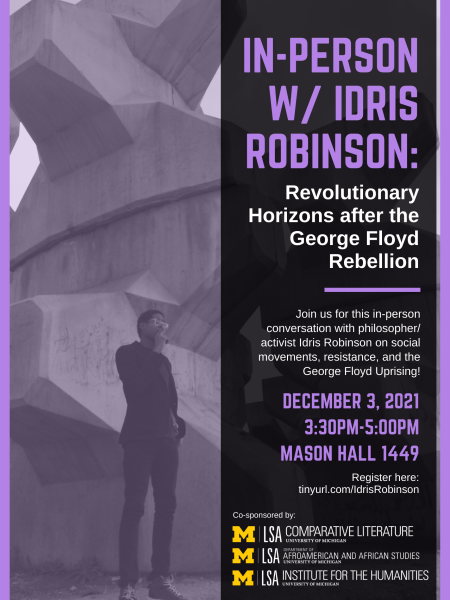 Join us for this in-person conversation with philosopher/ activist Idris Robinson on social movements, resistance, and the George Floyd Uprising on Friday, December 3, 2021 @ 3:30pm in Mason Hall, Room 1449.

In the aftermath of the CHAZ occupation in downtown Seattle, Idris Robinson presented “How It Might Should Be Done”: a public talk intended to survey the horizon of revolutionary potential uncovered by the George Floyd Rebellion during the hot summer of 2020. The revised essay of the same title, published in Ill Will that August, is seen in radical circles as one of the definitive texts of the uprising. In ten putative theses, ranging from identity politics, the current pandemic, to the legacy of black revolt, “How It Might Should” sought to facilitate a more direct and focused discussion regarding the stakes of emancipatory transformation at the very heart of empire. Since the uprising, the crisis has only deepened, presenting new possibilities and dashing others: In this upcoming talk at the University of Michigan, Idris will both reassess and expand upon previous themes, such as a theorization of civil war as stasis, an examination of the abolitionist race-traitor through the lens of a political theology of martyrdom, and the libidinal death-drive suffusing American racial dynamics.

Idris Robinson is a Ph.D. candidate in the Department of Philosophy at the University of New Mexico. For over a decade, he has written extensively on revolt and crisis in both European and American contexts. In his properly academic research, he works towards cultivating an open and comparative approach that encompasses both contemporary Continental and Anglo-American philosophy, while remaining informed by insights from various pre-modern traditions. He is currently working on a dissertation on ontological realism, logical morphology, and the role of paradigms in the progression of Wittgenstein’s thought.
Department of Afroamerican and African Studies (DAAS)
Haven Hall, Room 4700
505 South State Street
Ann Arbor, MI 48109-1045
daas-info@umich.edu
734.764.5513
734.763.0543
Sitemap
Facebook Twitter Youtube