The Natural History of the Ants of Michigan's E.S. George Reserve 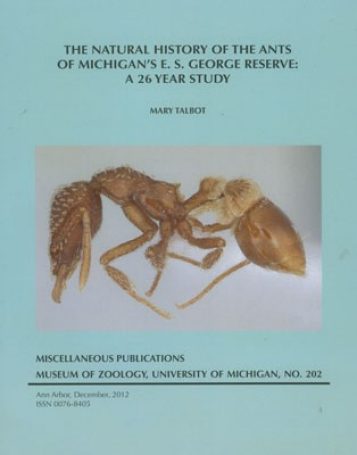 Shortly before she died in April 1990 Mary Talbot sent her final manuscript for "Ants of the Edwin S. George Reserve…" to Francis C. Evans who forwarded it to the Museum of Zoology. It was passed on to Paul B. Kannowski, (Adjunct Curator of Insects) who was able to finish the section on Myrmica species and complete the final editorial adjustments.

Introduction:
Ants are among the most important animal components of terrestrial ecosystems. Their habit of forming colonies in nests connects them to their habitats in very special ways. They are both mobile and fixed. Their nests tie the colonies to specific communities but the workers' mobility as individuals enables the colonies to utilize resources at a distance. The permanence or semi-permanence of their nests and the longevity of the colonies in the community make ants ideal subjects for ecological behavioral studies.

I came to the Edwin S. George Reserve in the summer of 1951 to study the ant populations on the old field that was the site of long-term research on community dynamics by Francis C. Evans. From that collaboration came the two publications (Talbot 1953, 1954). While carrying out the old-field studies, I also undertook to find and identify all of the species of ants living on the reserve. Some of the species that I located became the subjects of intensive research on flight behavior and/or colony populations. As my tenure at the Reserve grew, I found the I had accumulated records for a very large number of species for such a relatively small geographical area. I found a total of 87 species (Talbot 1975b) living in habitats ranging from the floating mat of sphagnum moss in the bog surrounding Hidden lake to the dry sand of the blow-out area in the southeastern Rcorner. It is the great diversity of habitats represented on the Reserve the provides for this unusual abundance of species.