Writing instructor examines place and permanence in "Fidelities: A Chronology"

"Like most of his work, Fidelities tends to occupy a threshold between worlds: the familiar and unfamiliar, the past and present, the anthropocentric and environmental."
by Mackenzie Myers 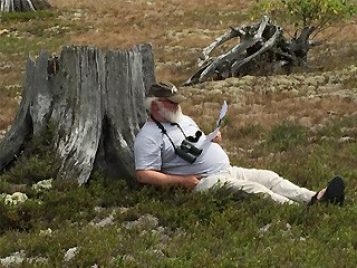 Right from the start, Keith Taylor’s most recent collection of writing, Fidelities: A Chronology  (Alice Green & Co., 2015), plants readers in northern Michigan. Taylor begins on Drummond Island, but weaves through places near and far—the Kingston Plains, Greece, a fire near Newberry. Like most of his work, Fidelities tends to occupy a threshold between worlds: the familiar and unfamiliar, the past and present, the anthropocentric and environmental.

Taylor, who teaches the Environmental Writing and Great Lakes Literature course at UMBS, says that many of his poems are based upon things he’s learned while in camp. From dinner conversations with scientists, to smaller—but impactful— moments he’s experienced there, the Bio Station has played an important part in his work. “I know I wouldn't have written those poems, and several others over different books,” he says, “if I hadn't been at the Station.”

Fidelities is available at Ann Arbor bookstores Crazy Wisdom and Literati. It will be for sale on Amazon in June.

Grey stumps of white pines were almost charred
into immortality by a fire so hot it burned off all the
organic matter in the top several inches of soil. Little
but lichen grew here for 130 years,

and now,
finally,
a clump of small,
ripe
blueberries.

from Fidelities: A Chronology