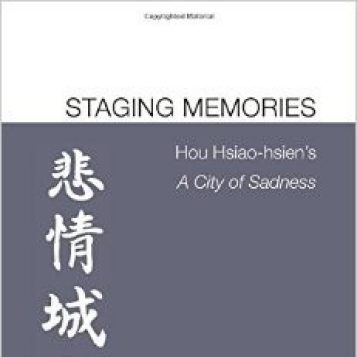 In Staging Memories, authors Abé Mark Nornes and Emilie Yeh present an updated study of Hou Hsiao-hsien’s landmark contributions to Taiwanese and world cinema, with particular emphasis on A City of Sadness (Beiqing Chengshi), the winner of the Golden Lion award at the 1989 Venice Film Festival. Staging Memories is based on Narrating National Sadness, one of the first hypertext analyses in film studies, and its analysis is couched in a general history of Taiwan, the political massacre that A City of Sadness recreates, and the history of Taiwan New Cinema. This background information is crucial context for viewers, and one of the reasons teachers have long valued the hypertext version of the book. The body of the text analyzes Hou’s style, representation of violence, and the complex manner in which he renders history in his oblique long-take style. The book ends with a chapter that examines a single sequence that unifies the various threads of the overall analysis.

“I unhesitatingly declare A City of Sadness the richest film of the past 50 years. So rich that it needs and rewards intricate research and analysis. And Staging Memories is nearly up to the level of the great film it beautifully evokes and tenaciously explores. Emilie Yeh and Abé Mark Nornes demonstrate why they are among the best Asian film scholars in the world.”