Riddles of Belonging: India in Translation & Other Tales of Possession 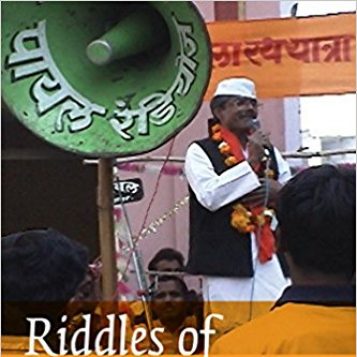 Can the subaltern joke? Christi A. Merrill answers by invoking riddling, oral-based fictions from Hindi, Rajasthani, Sanskrit, and Urdu that dare to laugh at what traditions often keep hidden-whether spouse abuse, ethnic violence, or the uncertain legacies of a divinely wrought sex change.

Herself a skilled translator, Merrill uses these examples to investigate the expectation that translated work should allow the non-English-speaking subaltern to speak directly to the English-speaking reader. She plays with the trope of speaking to argue against treating a translated text as property, as a singular material object to be "carried across" (as trans-latus implies.) She refigures translation as a performative "telling in turn," from the Hindi word anuvad, to explain how a text might be multiply possessed. She thereby challenges the distinction between "original" and "derivative," fundamental to nationalist and literary discourse, humoring our melancholic fixation on what is lost. Instead, she offers strategies for playing along with the subversive wit found in translated texts. Sly jokes and spirited double entendres, she suggests, require equally spirited double hearings.

The playful lessons offered by these narratives provide insight into the networks of transnational relations connecting us across a sea of differences. Generations of multilingual audiences in India have been navigating this "Ocean of the Stream of Stories" since before the 11th century, arriving at a fluid sense of commonality across languages. Salman Rushdie is not the first to pose crucial questions of belonging by telling a version of this narrative: the work of non-English-language writers like Vijay Dan Detha, whose tales are at the core of this book, asks what responsibilities we have to make the rights and wrongs of these fictions come alive "age after age."