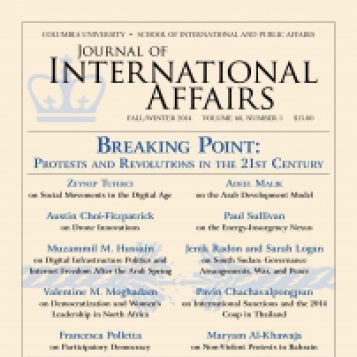 This article presents a brief characterization of the transformational consequences of the Arab Spring for global policy frameworks and democracy promotion efforts regarding Internet infrastructure. To do so, we begin with unpacking the battle that took place in Dubai in December 2012 at the World Conference on International Telecommunications (WCIT-12) between competing state powers, technology policy regimes, and civil society activists jockeying on the global stage to promote Internet freedom. Particular emphasis is placed on the discourses and controversies carried over from the Arab Spring surrounding Internet freedom as democracy promotion, including the growing importance of transnationally-organized and tech-savvy civil society activists who have joined these opaque policy debates. The next section focuses on highlighting the new practices and ideologies of this particularly novel “community of practice” comprising transnational tech-savvy activists who have joined the Internet freedom proto-regime. The final discussion elucidates the policy innovations and frameworks born from the interactions of this diverse stakeholder network since the Arab Spring, and contrasts them with those of the state and private sector stakeholders who traditionally hold sway in shaping information infrastructure policies. We conclude by outlining the opportunities and challenges facing these policy entrepreneurs and the democratic interests of global Internet users.

More about this faculty