The Life and Work of Francis Willey Kelsey: Archaeology, Antiquity, and the Arts 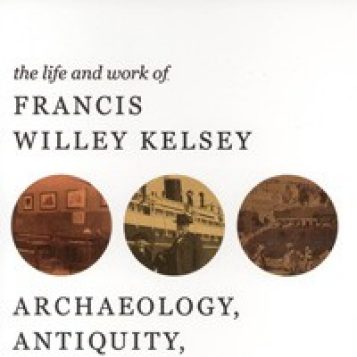 President of the Archaeological Institute of America, professor at the University of Michigan from 1889 to 1927, and president of the American Philological Association, Francis Kelsey was crucially involved in the founding or growth of major educational institutions. He came to maturity in a period of great technological change in communications, transportation, and manufacturing. Kelsey took full advantage of such innovations in his ceaseless drive to promote education for all, to further the expansion of knowledge, and to champion the benefits of the study of antiquity.

A vigorous traveler around the United States, Europe, and the Mediterranean, Kelsey strongly believed in the value of personally viewing sites ancient and modern and collecting artifacts that could be used by the new museums and universities that were springing up in the United States. This collecting habit put him in touch with major financiers of the day, including Charles Freer, Andrew Carnegie, and J. P. Morgan, as he sought their help for important projects.

Drawing heavily on Kelsey's daily diaries now held at the University of Michigan's Bentley Historical Library, John Griffiths Pedley gives us a biography that records the wide-ranging activities of a gifted and energetic scholar whose achievements mirrored the creative and contributive innovations of his contemporary Americans.