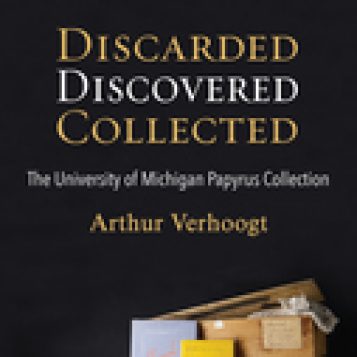 Discarded, Discovered, Collected provides an accessible introduction to the University of Michigan’s collection of papyri and related ancient materials, the widest and deepest resource of its kind in the Western hemisphere. The collection was founded in the early part of the 20th century by University of Michigan Professor of Classics Francis W. Kelsey. His original intention was to create a set of artifacts that would be useful in teaching students more directly about the ancient world, at a time when trips to ancient sites were much harder to arrange.

Jointly administered by Michigan’s Department of Classical Studies and its Library, the collection has garnered significant interest beyond scholarly circles and now sees several hundred visitors each year. Of particular note among its holdings are sixty pages of the earliest known copy of the Epistles of St. Paul, which are often featured on tours of the collection by groups from religious institutions.

Arthur Verhoogt, one of the current stewards of the Papyrology Collection, provides clear, insightful information in an appealing style to engage general readers and scholars alike. Extensively illustrated with some of the collection’s more spectacular pieces, this volume describes what the collection is, what kinds of ancient texts it contains, and how it has developed from Francis Kelsey’s day to the present. Verhoogt describes in detail how people who study papyri carry out their work, and how papyri contribute to our understanding of various aspects of the ancient Greco-Roman world. Translations of the ancient texts are presented so that the reader can experience some of the excitement that comes with reading original documents from many centuries ago.