Papyri from Karanis: The Granary C123 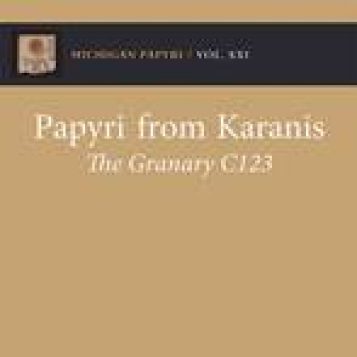 Papyri from Karanis: The Granary C123 is the twenty- first volume of University of Michigan papyri and the fourth devoted to texts from the University’s excavations at Karanis. The volume offers a contextualized edition of thirty-seven documents found in  a single structure, a large granary (C123) originally built in the first century CE, in addition to an analysis of the archaeology and history of the structure.

The documents are presented with an introduction, transcription of the original Greek or Latin, translation, commentary, and images. A unique community prayer to the emperor and gods (827) is the volume’s most notable contribution. The other papyri are a mix of private and public documents (petitions, declarations, letters, lists, etc.) that date from between the first century BCE and the fourth century CE. The typological and chronological mix of texts shows that they do not form an undisturbed archive but were rather a dump of wastepaper and other household objects.

Michigan’s excavated papyri are here presented for the first time on the basis of their archaeological find spot rather than being organized according to content. The volume’s introduction provides a possible model for analyzing legacy data from the Karanis excavations stored at the University of Michigan. The book will be of interest to papyrologists, ancient historians, and archaeologists of Greco-Roman Egypt.