A Mid-Republican House from Gabii 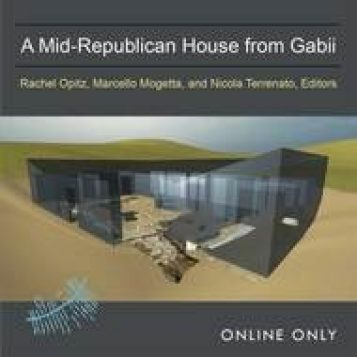 The first major publication from the international Gabii Project

Since 2009 the Gabii Project, an international archaeological initiative led by Nicola Terrenato and the University of Michigan, has been investigating the ancient Latin town of Gabii, which was both a neighbor of, and a rival to, Rome in the first millennium BC. The trajectory of Gabii, from an Iron Age settlement to a flourishing mid-Republican town to an Imperial agglomeration widely thought to be in decline, provides a new perspective on the dynamics of settlement in central Italy. This publication focuses on the construction, inhabitation, and repurposing of a private home at Gabii, built in the mid-Republican period. The remains of the house provide new information on the architecture and organization of domestic space in this period, adding to a limited corpus of well-dated examples. Importantly, the house's micro-history sheds light on the tensions between private and public development at Gabii as the town grew and reorganized itself in the mid- to late- Republican period transition. Published in digital form as a website backed up by a detailed database, the publication provides a synthesis of the excavation results linked to the relevant spatial, descriptive, and quantitative data.