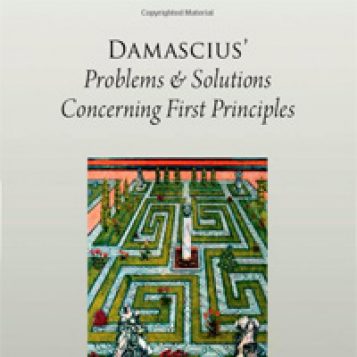 Damascius was head of the Neoplatonist academy in Athens when the Emperor Justinian shut its doors forever in 529. His work, Problems and Solutions Concerning First Principles, is the last surviving independent philosophical treatise from the Late Academy. Its survey of Neoplatonist metaphysics, discussion of transcendence, and compendium of late antique theologies, make it unique among all extant works of late antique philosophy. It has never before been translated into English.

The Problems and Solutions exhibits a thorough going critique of Proclean metaphysics, starting with the principle that all that exists proceeds from a single cause, proceeding to critique the Proclean triadic view of procession and reversion, and severely undermining the status of intellectual reversion in establishing being as the intelligible object. Damascius investigates the internal contradictions lurking within the theory of descent as a whole, showing that similarity of cause and effect is vitiated in the case of processions where one order (e.g. intellect) gives rise to an entirely different order (e.g. soul).

Neoplatonism as a speculative metaphysics posits the One as the exotic or extopic explanans for plurality, conceived as immediate, present to hand, and therefore requiring explanation. Damascius shifts the perspective of his metaphysics: he struggles to create a metaphysical discourse that accommodates, insofar as language is sufficient, the ultimate principle of reality. After all, how coherent is a metaphysical system that bases itself on the Ineffable as a first principle? Instead of creating an objective ontology, Damascius writes ever mindful of the limitations of dialectic, and of the pitfalls and snares inherent in the very structure of metaphysical discourse.