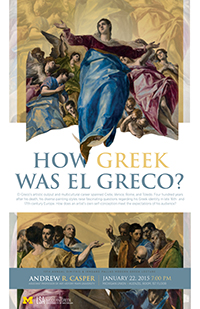 ABSTRACT: Born in Crete around 1541, there is no doubt about the ethnic origins of the painter Domenikos Theotokopoulos, better known as “El Greco” (“The Greek”). And yet the issue becomes much more complex when we take into consideration the painter’s artistic output and the multicultural path that he followed throughout his career. For an artist whose career spanned Crete, Venice, Rome, and Toledo (Spain), the issue of his “Greekness” results in something of a conflict between his own self-conception and the expectations of his audiences. This paper will examine the diversity of El Greco’s painting styles as well as the communicative goals of his signatures to explore the fraught issues of his Greek identity in late sixteenth- and seventeenth-century Europe.

BIO: Andrew Casper earned his Ph.D. at the University of Pennsylvania and is currently Assistant Professor of art history at Miami University in Oxford, Ohio, where he specializes in Renaissance and Baroque art in southern Europe. He is the author of numerous articles on sixteenth-century icons and the religious paintings from El Greco’s Italian period. His book Art and the Religious Image in El Greco’s Italy (Penn State University Press, 2014) uses El Greco’s early paintings to advance new ideas concerning the conception of religious imagery after the Council of Trent.  His current research examines the sixteenth- and seventeenth-century artistic conception of the Shroud of Turin as a divine painting. His research and publications have been supported by grants from the American Philosophical Society, Art History Publication Initiative, College Art Association, Fulbright, Italian Art Society, National Endowment for the Humanities, and the Newberry Library. Professor Casper is the winner of the 2014 Miami University Distinguished Teaching Award.