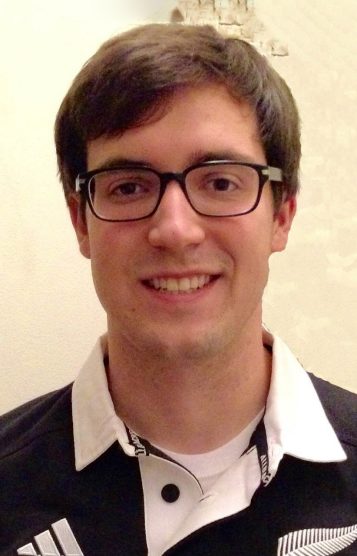 His Story: William Waalkes’ interest in astronomy dates back to childhood memories watching early-morning meteor showers with his father. But he never considered it as a career choice. That changed when, as a pre-med major at Grand Valley State University, Will began taking the required physics courses while reading books by physicist Richard Feynman and astronomer Carl Sagan. “My physics and chemistry courses were giving me a better grasp on how things worked in the natural world,” he says. “It was addicting. I realized I wanted to take it further and understand more.” As Will discovered he had both an interest in and aptitude for these areas of science, he transferred to U-M to double major in physics and astronomy.

His Research: Interested in extrasolar planets, Will spent a summer working with Dr. O.J. Tucker in the Department of Atmospheric, Oceanic, and Space Sciences to help model the atmosphere of Titan, Saturn’s largest moon. He now works with astronomy professor Ted Bergin, using spectroscopic data to analyze hydrogen cyanide populations in the Orion and NGC 6334 nebulae. “We know that the Earth’s atmosphere is predominantly nitrogen in the form of N2 gas,” says Will. “So our underlying question is: How does the complexity and composition of nitrogen compounds change as stars and planets form in the interstellar medium?” His goal is to parlay this work into a journal article before he graduates.

Favorite Experiences: Taking star-gazing trips and running public open houses as part of the Student Astronomical Society. “Through SAS, I’ve been trained to run the planetarium and telescope on top of Angell Hall,” he says. “That’s experience people don’t usually get as an undergraduate – if ever.”

Advice for Fellow Students: It’s never too early to start research. It will expose you to different aspects of the field and build skills you’ll need for the future. Also, don’t be intimidated by astrophysics as a field. It’s challenging, but the faculty are incredibly helpful. If you have the interest, they can help you get where you want to go.