The department is a great place for students interested in instrumentation because our faculty work on projects that are technologically advanced but small enough to be accessible to students. In fact, students get hands-on experience in every step of the process — idea generation, design, building, testing/calibration, and using the new equipment. Smaller student-led projects can also utilize our smaller telescope assets (e.g. the 1.3 and 2.4 meter telescopes at MDM) for development and commissioning. 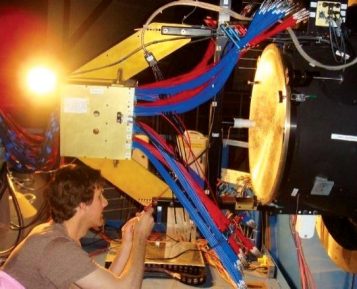 Professor Mario Mateo has just completed a major upgrade to his ground-breaking fiber spectrograph at Magellan. His original instrument yielded a 100-fold increase in the number of targets that could be sampled at a given time and allowed his group to generate intriguing observational challenges to the theory of cold dark matter. His new version is even more powerful, flexible, and efficient. As the major sky surveys generate new detections, Mateo’s spectrograph is well-positioned to follow up on their chemistry, temperature, and velocity. One of his graduate students led the calibration efforts and plans to use the instrument to search for and analyze exoplanets.

Professor Michael Meyer has been involved in developing a number of ground- and space-based instruments including NIRCam and NIRISS for the NASA/ESA/CSA James Webb Space Telescope, as well as ERIS for the ESO VLT, MIRAC-5 for the 6.5 meter MMT and Magellan, as well as METIS for the ESO ELT.

All of these instruments will make significant contributions to the discovery and characterization of exoplanets. New projects under development will take advantage of recent developments in small satellite technology, as well as the infrastructure of the Michigan Space Institute, to study exoplanets.

These efforts, including projects with significant student involvement, are described in detail here.